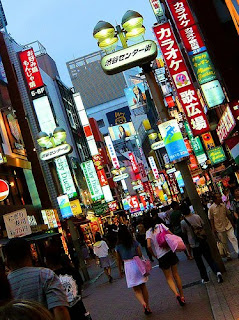 Readers of this blog have probably noticed that I regularly post about China and globalization. I've devoted much less space to Japan, even though I once lived in Tokyo as a JSPS (Japan Society for the Promotion of Science) Fellow. While in Tokyo I dated an All Nippon Airlines stewardess, trained in MMA with local fighters and spent too much time in Shibuya (pictures above and below). I scandalized my physicist hosts by (a) visiting Thailand on the way to Tokyo and (b) investigating all kinds of weird social phenomena in my spare time (see below).

Below are a few old pictures, the first four from Thailand (Ko Samui) and the rest from Kamakura, Japan. 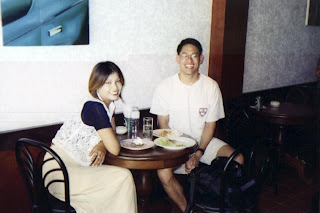 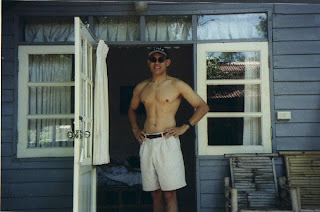 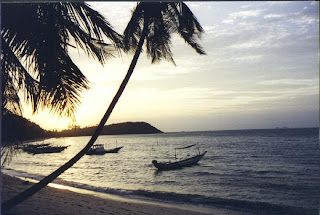 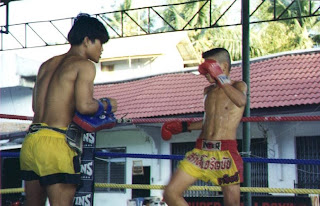 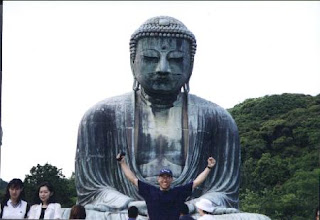 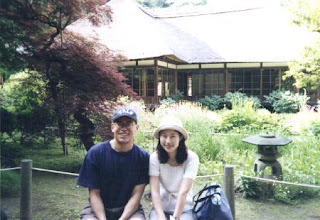 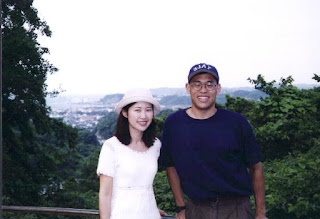 While in Japan I wrote a travelogue which I posted on the internet. That may not sound very radical, but this was back in 1997, long before the appearance of blogs :-) The travelogue covers topics like girlie bars, muay thai and expats in Thailand, Judo vs BJJ in Tokyo, physics lectures in Kyoto and at KEK, Japanese youth culture, etc. Any Hollywood producers or directors interested in making this into a movie should contact me right away ;-)

For those who are interested in Japan but don't want to read my stuff, I recommend the following.

Lafcadio Hearn: the grandfather of foreigners writing in English about Japan. Hearn arrived in Japan in 1890 as a journalist, eventually becoming professor at Tokyo Imperial University. See here for a collection of his work.

The blog Neojaponisme, edited by Harvard grad W. David Marx (an expat writer and musician in Tokyo) offers excellent writing about Japan, often informed by the latest academic research. For example, The misanthropology of the late stage kogal is about the kogal (video) and enjo kosai phenomena, which very much puzzled me when I was in Tokyo. (Having access to this research at the time could have saved me a lot of field investigation ;-) Kyabaio Japan is about hostess clubs, a topic covered with much less insight recently in the Times. 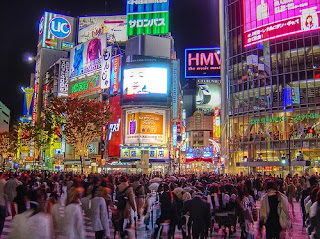 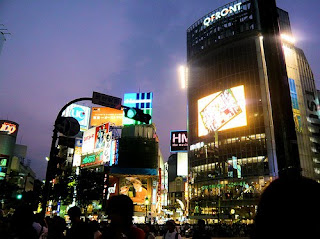 Did you ever see the documentary "The Great Happiness Space" about host clubs in Japan?

Thras, looks interesting! I notice you can watch it online now.

For old school Japan-hands out there, anyone remember Juliana Tokyo?
http://en.wikipedia.org/wiki/Juliana%27s

1. In the lowest top five in income inequality/

4. Trade surplus despite no natural resources.

On a list of "greatest countries in the world", Japan is at least 100 places above the US.

I'm posting from Ikebukuro, where the leering continues. ;-)
Some call it the armpit of Tokyo.

Japan looks more interesting, I see that in your blog, nice!

I asked on the Tech Review site but should ask it here: Do you have links to similarly insightful materials that argue for why Japan is actually a vanguard in some ways for post-growth/post-modern world, that it is facing in some sense its aging population and loss of industry, in a way that others can learn from?

Those are good questions but I don't have any good answers.

I've seen coverage (e.g., in the Times) of the emphasis on robotics in Japan as a way to cope with their demographic problems, but it was pretty facile.

As far as the "hollowing out" of Japanese industry against competition from other NE Asian countries, I haven't seen any analysis that suggests they really have an effective plan. Note, though, that their automotive industry is well positioned after the collapse of Detroit.

You might find some interesting stuff on how Japan is coping with 15+ years of economic doldrums -- how it has affected the attitudes and ambitions of younger people, freeters, etc. There is a bit of discussion on this topic on one of the neojaponisme podcasts. Be prepared to sit through lots of pop-culture otaku discussion, though :-)

Sorry I don't have anything better for you.

Kent, perhaps this is relevant to your question?

A certain explanation about the rise of Japanese Cool has wiggled its way into the conventional wisdom: the creative explosion in the 1990s that enabled the mass-exporting of Japanese popular culture to the rest of the world happened precisely because the Japanese economy went sour. The pundits employing this argument posit an inverse-relation between economic growth and culture. In other words, creativity increased once the Japanese stopped obsessing over economic expansion. A relatively eloquent version of this argument appears in Roland Kelts‘ Japanamerica (180-181):

Younger Japanese had grown-up amid the wealth of the post-war Japan Inc. machine just as its cogs were starting to falter. But instead of stymieing them, the resulting slump actually cultivated their creativity. In a weak job market, graduates and dropouts alike had little to lose.

“The recession was enormously productive for [Japan's] counterculture,” says 2dk’s David d’Heilly. “Previously these people were at Dentsu cranking out Honda ad’s. Now they’re setting up their own indie fashion labels, or coding the Web, or doing other things that are closer to what they want to be doing.”

Novelist Haruki Murakami points to the role that adversity, albeit in a relatively mild form, played in fostering Japan’s less corporate cultural identity: “When we were rich in the 1980s, we weren’t producing any kind of international culture. But when we got poor again, we got humble. Then we became creative.”

There are very serious flaws to this reasoning. (The following points may seem familiar to long-time Néomarxisme readers, but we — learn — by — repetition.)

There has been speculation that Japan's aging population will soon lead to a trade deficit. A dearth of workers will mean higher wages and more consumption, but Japan can always sell its dollars. With a trade deficit it will have to.

Thanks, Steve. That’s a good lead. Here is my problem. Everybody is familiar with two arguments. 1: Material economic growth can’t continue on its worldwide pace due to climate/energy/environmental limits. 2: Economic growth is imperative for any kind of social success and equity. A lot of people will deny or avoid one argument in order to save the other. That’s honest, but neither of those approaches seems to be working. I would prefer to see both arguments supported, but I don’t find the current crop of reconciliations especially convincing. You can grow by selling green technology, but I think that only attenuates continued material growth. (You manufacture massive wind mills in order to heat more swimming pools.) Could economic growth disentangle itself from its material substrate, and from its reliance on large youth population? What would a low-material, high-age, high-growth society look like? I have no idea, but I might look for it in Japan. It’s not that you like spare living for its own sake, but because it becomes a means to get something better. It has to do with cultural goods. Accounting might have to change in order to detect this kind of growth. That’s where Sakaiya comes in, where he argues that the world will turn to a subjective culture. He has hilarious examples from the Middle Ages where an ‘economy’ was very active in producing satisfactions that we don’t recognize.