Economics: is it science?

The Making of An Economist Redux by David Colander

The paper describes a survey taken by graduate students at seven top-ranking economics programs. There is an enormous spread in opinions on questions such as: Is neoclassical economics relevant? Do economists agree on fundamental issues? Can fiscal policy be an effective stabilizer? Should the Fed maintain a constant growth rate of the money supply? (See below for results.)

For example, just over 50% of students agreed somewhat or strongly that Economists agree on fundamental issues, whereas 44% disagreed. These results were barely changed over 20 years -- is that a strong indicator of little progress in the field, at least as far as fundamental issues? ***

See the paper for more, or the book, which contains transcripts of interviews conducted at each of the schools. Some parts of the interviews are very funny, like when Colander asks the students Have you ever read any older economists, like Hayek, Robinson or Keynes? The discussion of sociology vs economics is also quite amusing.

The most tragic (yet deepest) question in the interviews is Do economists test theories? Colander obviously understands what he is asking but few of the students seem to.

In the survey results below, "Then" refers to an earlier survey done in the 1980s, "Now" refers to one done around 2002. Click below for larger images. 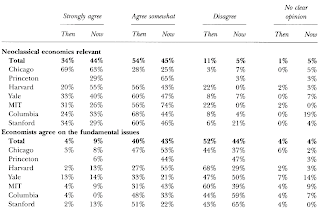 *** So as not to appear to be an ugly physicist, let me note that we have yet to find the Higgs particle, haven't discovered what the dark matter is but rather discovered a new mysterious substance called dark energy that no one can explain, and still don't know how quantum gravity works. I might also add that physicists disagree about the foundations / interpretation of quantum mechanics, although we don't disagree about the fact that we disagree :-)
Posted by Steve Hsu at 6:52 PM

"Colander obviously understands what he is asking but few of the students seem to."

I hope you haven't fallen into the trap, as I suppose mathematical physicists are most likely to do, in thinking that science is coming up with theories and testing them. That's only a small part of it. Mere observation and description is another. If only economics were more descriptive and less theoretical. But I suppose the mathematical models are motivated by "self-esteem issues".

I think we disagree that about the fact that we disagree concerning the foundations of quantum mechanics. That is I know plenty of physicists who don't think there is anything to worry about in foundations.

Okay back to dealing with my self-esteem issues by writing down equations.

anon: there was a relatively sophisticated discussion of the question "Do economists test theories" in their literature some years ago -- google that phrase and you'll find articles by Dierdre McClosky, Ed Leamer and others on the question. So I do think Colander knows he is asking a subtle question, involving both statistical issues and the philosophy of science. But only one or two of the grad students he interviews seem to appreciate this.

Dave: lots of physicists say "just shut up and calculate" so that, practically speaking, there is no issue with foundations of qm. But I think they also know there are different camps with mutually inconsistent interpretations. The point in physics is that the different interpretations all predict the same thing for experiments we can currently perform.

Didn't Heisenberg say something like, "What do you mean what does it mean? It doesn't mean anything. The mathematics is the reality."

And Bacon. The "self esteem issues" are for economists not for physicists. They can't stand the thought that they aren't as smart as the guys in the physics department.

Anon: No I think physicists have them too! I mean there are, even within physics, those who use math simply to make their results look more important than they are.

Steve: You've been talking to too many of the nice reasonable physicists!