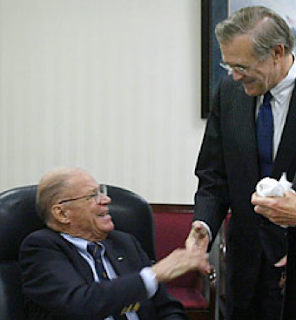 Better late than never. Rumsfeld, Bush and Cheney have a lot to learn from Robert S. McNamara.

They shall not grow old, as we that are left grow old:
Age shall not weary them, nor the years condemn.
At the going down of the sun and in the morning
We will remember them.

Comment posted on the Times site, from Bill Baldwin Jr. of Los Angeles:

It is "unfortunate" that three friends of mine, among a group of 58,000 other Americans of my generation, can’t shed their "let's move on" tears of forgiveness for the late Sec. of Defense, Robert S. McNamara, but they're dead. Bernard, the blond surfer looking Navy helicopter pilot, who on his second tour of duty in Vietnam, wouldn’t leave eight wounded Army guys trapped in a firefight and died along with them trying to fly out of the hot zone; John, the son of a minister in Santa Barbara, trained as a broadcast specialist as I was in 1968, but was pressed into walking patrol his first week in country and came home in a box before Mayor Daily ever hosted that friendly summer gathering of folks in Chicago; and Keith, a fellow rock & roll playing buddy from the mail room at Disney, I don’t know how he “bought the farm” down in McNamara’s little dust up, just that he never got a chance to wear pressed jeans while doing hustle to “Disco Inferno”.

But please feel free to label my response here as “mean spirited” or whatever the current buzz words slogan might be you have received as approved by Move On or Twittered from your personal empowerment group, because words, including my own, won’t bring back Bernard, John or Keith, but I’d feel as if I had failed in my responsibilities as a friend if I didn’t express my feelings at the passing of Robert McNamara, who made it to 93 before he left the scene. My friends never made it to their 25th birthdays.

The comment from Mr Bill Baldwin is not really a thought, merely a juxtaposition of facts.

To turn it into an idea, which may be can be replied to, he should connect the dots that he gave us :

There are so many lessons to be drawn from those facts that it is difficult to guess which one he intended to express.

I will personally just underline that the dire consequences of a war dictates that it is essential for the collectivity to work efficiently, be without unwarranted influence, anticipate as much as possible and act accordingly and decisively.

The US has a lot to do on those, as it has in more than one occasion be misguided (eg strategic reliance on oil, saoudi arabia policy, gaps in intelligence and threat assessment) for various reasons.

What in the name of God are you trying to say? You bitch about Baldwin not collecting 'dots' while you can't even connect words into a coherent text.

I don't know which part you refer to so it is hard for me to answer your thoughtful comment.

My criticism was that there was a frame missing to turn facts into conclusion, including a moral accusation like the author seems to do.

Followed by my personal take on what frame there could be, and what constructive criticism a concerned citizen, like this man seems to be, could have been derived from it.

But, hey, if it's the Chomsky comment that bugged you, just say so.

In the unlikely event that Nicolas, or anyone who agrees with Nicolas, ever reads this:
1) note that Steve Hsu is smarter than you are.
2) avoid taking any offense; he's also smarter than me.
3) read Mr Bill Baldwin again.