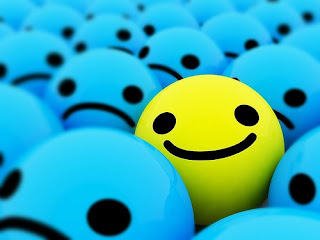 I love this picture, perhaps because I am slightly hypomanic (see old post below) and associate myself with the smiley ball.

How do I know I'm hypomanic? Because I've twice been diagnosed as such -- once by a research psychologist who lived next door to me in New Haven, and the second time by a very precise Japanese colleague who was my host for several months in Tokyo. ("Are you familiar with the term Hypomania?" he asked.) This was years before I started a tech company.

Anyone who knows me is welcome to add their diagnosis :-)

hy·po·ma·ni·a: A mild form of mania, characterized by hyperactivity and euphoria.

From the intro to The Hypomanic Edge by J. Gartner, professor of psychiatry at JHU medical school.

"The 1990s will be remembered as the age of Internet mania, a time when entrepreneurs making grandiose claims for their high-tech companies swept up millions of Americans with their irrational exuberance, inflating the biggest speculative bubble in history. The idea that some entrepreneurs may be a little manic is hardly new. A Google search for "manic" and "businessman" yields more than a million hits. Entrepreneurs, as well as the markets they energized, were commonly described in the media as "manic." Yet, until now, there has never been a serious suggestion that the talent for being an entrepreneur and mania, the genetically based psychiatric disorder, are actually linked. Perhaps because I am a clinical psychologist, it was clear to me that "manic" was more than a figure of speech in this case.

I called several reporters who had written profiles of these "manic" entrepreneurs and asked them, "Do you think he really was manic?" None said yes. "Not really manic; not clinically," was a typical response. They resisted applying the psychiatric diagnosis because the entrepreneurs they had interviewed were boastful, hyperenergized, and zany, but they "weren't crazy." And the journalists were right. Their subjects were not manic. They were hypomanic. Hypomania is a mild form of mania, often found in the relatives of manic depressives. Hypomanics are brimming with infectious energy, irrational confidence, and really big ideas. They think, talk, move, and make decisions quickly. Anyone who slows them down with questions "just doesn't get it." Hypomanics are not crazy, but "normal" is not the first word that comes to mind when describing them. Hypomanics live on the edge, betweeen normal and abnormal.

...My new hypothesis became that American entrepreneurs are largely hypomanic. I decided to undertake what social scientists call a pilot study: a small-scale, inexpensive, informal investigation meant to test the waters. I placed announcements on several Web sites devoted to the technology business, expressing my interest in studying entrepreneurs and requesting volunteers. I interviewed a small sample of ten Internet CEOs. After I read them each a list of hypomanic traits that I had synthesized from the psychiatric literature, I asked them if they agreed that these traits are typical of an entrepreneur:

* He is filled with energy.
* He is flooded with ideas.
* He is driven, restless, and unable to keep still.
* He channels his energy into the achievement of wildly grand ambitions.
* He often works on little sleep.
* He feels brilliant, special, chosen, perhaps even destined to change the world.
* He can be euphoric.
* He becomes easily irritated by minor obstacles.
* He is a risk taker.
* He overspends in both his business and personal life.
* He acts out sexually.
* He sometimes acts impulsively, with poor judgment, in ways that can have painful consequences.
* He is fast-talking.
* He is witty and gregarious.
* His confidence can make him charismatic and persuasive.
* He is also prone to making enemies and feels he is persecuted by those who do not accept his vision and mission.

I feared they might find the questions insulting. I needn't have worried. All of the entrepreneurs agreed that the overall description was accurate, and they endorsed all the hypomanic traits, with the exceptions of "paranoia" and "sexual acting out" (these traits in particular are viewed as very negative and thus may be more difficult to admit to). Most expressed their agreement with excitement: "Wow, that's right on target!" When I asked them to rate their level of agreement for each trait on a standard 5-point scale, many gave ratings that were literally off the chart: 5+s, 6s. One subject repeatedly begged me to let him give a 7."

Your diagnosis is SANE. Psychiatry is BS. It's a business first. This means promoting the idea that everyone is crazy. It does enormous harm. But at the same time everyone wants to believe that their problems can be undone with a pill.

If you start washing your hands 100times a day or going around campus naked and screaming then you might have a problem.

IMO traits other than hypomania will become significant when the entrepreneurial population is sorted according to financial success.