If I read this figure properly, US taxpayers could be on the hook for as much as $513 billion dollars of CDS insurance issued by its 377 person AIGFP (financial products) unit in London. Note also the compensation paid to the unit since 2001. Not bad! (Click for larger version; from NYTimes.) 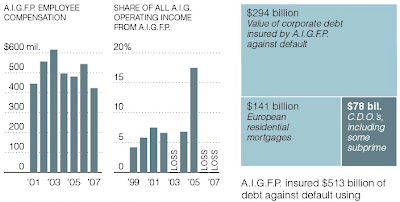 Of course, half a trillion is a worst case scenario. So far, government bailout funds paid to AIG have been re-gifted as detailed below. Over $35 billion went to foreign banks. US taxpayers go the extra mile to save the financial system!

Big foreign banks also received large sums from the rescue, including Société Générale of France and Deutsche Bank of Germany, which each received nearly $12 billion; Barclays of Britain ($8.5 billion); and UBS of Switzerland ($5 billion).

AIGFP was headed by Joseph Cassano. See earlier post Clawbacks, fake alpha and tail risk for more details. So far I nominate Cassano as the king of fake alpha.

"It is hard for us, without being flippant, to even see a scenario within any kind of realm of reason that would see us losing one dollar in any of those transactions.'' -- Joseph J. Cassano, a former A.I.G. executive, August 2007

This is sick. Why in the world are we helping these companies that keep sending millions to people who do not know how to run a company? They cry yet get paid millions on the "average joes" taxes. Furthermore, I fear this is just the tip of the iceberg. Look what Enterprise rent-a-car did to get bailout funds:

Not to make excuses for these people, but the bailouts are making crooks out of everyone that touches the money.

Aig really made a mess out of my life because they were the workers comp carrier for the company were I worked for 25 years. The whole story is very long contact me and I will tell all.Ithappened in 12/22/05 and still problems. I say dont give them a dime shut them down and hang them by the -----.

CDSs aren't used for insurance. If they were wouldn't the premium give a treasury yield every time?

They were used and will be used to speculate. The market makers in this area are running bucket shops.

Citadel and the CME want to be a clearer of CDSs.

Much better --- outlaw them. Fines for all US and UK businesses who trade in these bets directly or through subsidiaries.

Because derivatives are not regulated in such a way as to shut out speculators and allow only hedgers.

The problem with CDS isn't that people speculate with them. There is no such thing as a 'hedgers only' market. Hedgers and speculators are complementary parts of the risk transfer function.

The issue with CDS is that there is NO RELIABLE DIVERSIFICATION strategy. The normal 'insurance' parts of AIG probably are ticking over relatively unchanged (apart from portfolio impact) because they DO have diversification strategies. Write policies in both Montana and Louisiana, and hurricane damage doesn't wipe you out. But it turns out that 'hurricanes' in any segment of the credit market wind up blowing down 'structures' throughout the credit world. At least under conditions that are a lot less rare than Cassano was betting.

AIG was a basically sound and sensible insurance company which was overwhelmed by it's 'side' business writing CDS. That in turn happened in large part because of the ideological "hands off" attitude of the government since Reagan. A pro-active regulatory agency with broad jurisdiction would have established a degree of structure for the CDS market which would have limited AIG's ability to fire a torpedo through the hull of their own ship. This is not just speculation on my part either. The ideas were circulating in the relevant agencies, but attempts to regulate CDS were specifically shut down by Congressional action in 2000.

"Hedgers and speculators are complementary parts of the risk transfer function."

No. They are NOT. This is typical free-market ideology.

Commodity futures DO NOT require speculators.

Options DO NOT require speculators.

YOU DO NOT KNOW WHAT YOU ARE TALKING ABOUT.

Speaking of people who don't know what they're talking about. I saw a lecture by a Yale econ professor (Schiller was the name I think) claiming a stock has no intrinsic value if it will never pay a dividend. He forgot liquidation value and stock buy-backs.

If you want to ban 'speculators', please provide a precise definition and explain how you propose to enforce the indicated restrictions.

I'd like to see Treasury force AIG to spin off the Financial Products division and then put it into bankruptcy.

There is a game of 'musical chairs' going on among the AIG counterparties. Rather than continue setting out more chairs, we'd do better to stop the music and let them (and their lawyers) scramble for the remaining chairs. Even if we wind up needing to bail out some of those counterparties, cutting off the music would put an end to some of the accounting games.

The Real AIG Scandal
It's not the bonuses. It's that AIG's counterparties are getting paid back in full.
By Eliot Spitzer

Is that the Eliot Spitzer I know and love (see previous posts)? :-)

BTW, the standard answer for why you need "speculators" is to provide liquidity and to feed information into the market.

"Am I afraid of the populist outrage? Yes," said Lynn Tilton, chief executive of Patriarch Capital, a private-equity firm that has weighed making such an investment.

There is a term for coming up with reasons for the way things are whether thy need to be that way or not.

The term is "ideology".

Liquidity was more than sufficient 25 years ago yet volume has exploded. It's disgusting.

I'm not sure I agree with your definition of speculator, but I think the point you are trying to make has some merit. If I'm reading you right, the basic idea is to acknowledge that many derivatives positions involve substantial embedded leverage and that we could improve matters by regulating traders to maintain appropriate 'reserves' (or margin) against that leverage.

Maybe I'm reading too much into your comment, but if one were to define a rule which says 'you've got to hold the underlying' then there are a bunch of questions about 'how much?', 'how long?', etc. which I suspect would turn into something pretty analogous to banking regulations concerning capital reserves.

An important aspect of the AIG story was the way AIG was catering to European demand for CDS as a way to 'fake' regulatory capital:

"... about $379 billion of the $527 billion in AIG's default swap portfolio 'represents derivatives written for financial institutions, principally in Europe, for the purpose of providing them with regulatory capital relief rather than risk mitigation.'"

Some draw the moral that we should essentially 'give up on regulation', but I think the real lesson is that bankers love to cheat the regs, so having American de-regulators create a haven for synthesizing 'fake' capital to circumvent European regulations has proven to be self-defeating.

"If I'm reading you right, the basic idea is to acknowledge that many derivatives positions involve substantial embedded leverage"

Bubbles are, by definition, speculative.

If you aren't a market-maker or an investor, you're a gambler and you're a problem.

The consequences of speculation:

Someone buying for coupons and dividends, liquidation value, or stock buy backs doesn't care about the greater fool.

So Steve, suppose we let all the banks fail. As you showed in your CDS diagram, the problem is that if you let one bank fail then the imbalance in flux percolates throughout the network, but if you let them all fail then the net loss is much lower since they're all hedged. At most only tens of billions must change hands rather than trillions. Then we recapitalize all that are standing and start again. Wouldn't this be a cleaner way to do it. I guess this is the same as nationalizing but it would be the free market way to do it. It's the same with GM, I think we would be better off taking the 40 billion and paying the workers directly for retraining rather than prop up a zombie company. I'm sure we would end up saving some of that money, which could then go to startups and vibrant companies.

The CDS graph is pretty complex -- does Treasury, even now, know what it looks like? Six months ago I thought they'd be doing everything to find out, but now I question whether they've done their job.

Also, undoubtedly, many of the nodes are foreign banks (see payments listed in original post) and hedge funds. Are we going to nationalize them too?

Since CDS contracts require the posting of collateral, and since many of the housing-related contracts have been marked down already (the underlying CDOs might be trading at 50 percent of face value -- perhaps are even undervalued), perhaps most of the CDS-induced turmoil is already behind us? Maybe too good to be true.

Was Cassano right? Was AIGFP's CDS subrime exposure only for the super-senior tranche?

Good question. But there were real payouts to those other banks, not just posting collateral (at least as reported). So some contracts must have really triggered.

Not necessarily. To prevent having to post further collateral and perhaps by agreement with Uncle Sam AIG wanted to undo these contracts. But who will take the other side? No one. The counterparties say, "We'll do it, but we name the price."

How much does it cost to undo a CDS no one wants? A lot.

This is what I gathered from listening to Greenberg on Charlie Rose. Of course, he is not disinterested.

Still, I bought far out of the money calls on AIG yesterday.

Hmm... very good point. They may have just bought their way out.

So much for markets as good information processors -- why can't I find any detailed information on exactly what is going on with AIG CDS? After all, you and I own the company now.

anon:
AIG no longer holds most of the super senior swaps on multi sector CDOs, the contracts were terminated at a loss to AIG ( they were forced to realize the mark-to-market losses, even though credit losses are minimal, in fact close to 0), the counterparties also sold the underlying CDOs tranche to the fed (maiden lane iii), so upside will accrue to the "taxpayerx" via the fed spv and not to AIG.
Greenberg is biased but he is right there was no need to terminate the deals specially since mtm is so out-of-whack with realized credit losses, funding the collateral was all that was required and that would have left the upside with AIG.

I know I'm a hypocrite and a fool but Taleb has made out well with
black swan puts. I'll try the same with calls for a company that has been ruined unfairly even though 80% is "property of Uncle Sam" in warrants, convertible preferred, but not in common?

We don't need to nationalize everything. What would happen if we let the whole system fail and then recapitalize just enough of it to get a workable credit system again.

> What would happen if we let the whole system fail and then recapitalize just enough of it to get a workable credit system again.

The great depression. There would be a mad scramble, confusion and fear; the consequence would be significantly reduced economic activity.

You sound like a company man. I say let's roll the dice.

Capitalism will always survive, because socialism will save it.

The bourgeoisie knows it cannot survive another great depression.