What good is happiness if it can't buy money? 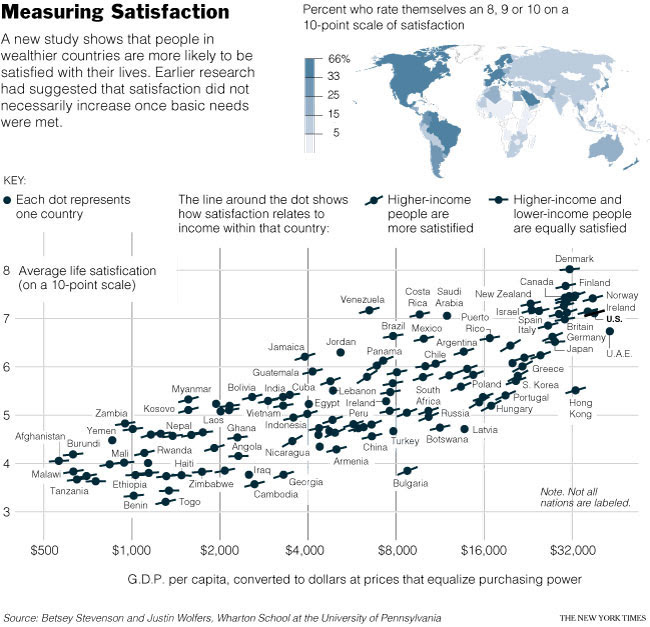 This NYTimes article covers recent results in happiness research, which shows that money does buy happiness after all ;-) The new data seem to show a stronger correlation between average happiness and economic development than earlier studies which had led to the so-called Easterlin paradox. One explanation for the divergence between old and new data is that people around the world are now more aware of how others in developed countries live, thanks to television and the internet. That makes them less likely to be content if their per capita incomes are low (see the hedonic treadmill below). The old data showed surprisingly little correlation between average income and happiness, but 30-50 years ago someone living in Malawi might have been blissfully unaware of what he or she was missing. See the article for links to the research papers and a larger version of the figure. Also see these reader comments from the Times, which range from the "happiness is a state of mind" variety to "money isn't everything but it's way ahead of whatever is in second place."

In previous posts we've discussed the hedonic treadmill, which is based on the idea of habituation. If your life improves (e.g., move into a nicer house, get a better job, become rich), you feel better at first, but rapidly grow accustomed to the improvement and soon want even more. This puts you on a treadmill from which it is difficult to escape. The effect is especially pernicious if you adjust your perceived peer group as you progress (rivalrous thinking) -- there is always someone else who is richer and more successful than you are! Note, the hedonic treadmill is not inconsistent with an overall correlation between happiness and income or wealth. It just suggests diminishing returns due to psychological adjustment.
Posted by Steve Hsu at 10:55 AM