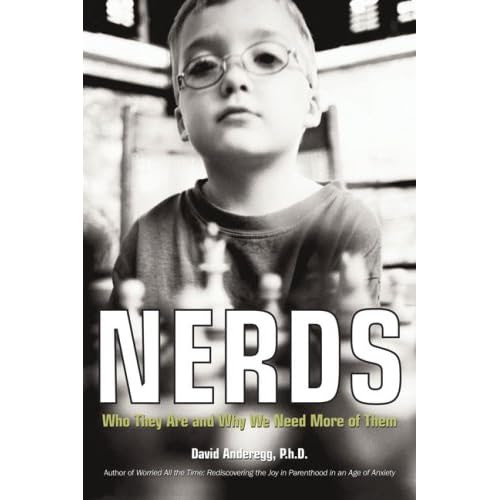 I haven't read this yet, but am looking forward to it. (OK, maybe I just like the title and cover :-)

Here is the author's web page; he's a psychology professor at Bennington.

Q: Do other countries have this problem?

A: The idea that it is unattractive or unappealing to be intelligent is not a universal concept. Not in Asia, certainly not in India. There's no concept in India that being good at math and science and technology has negative social consequences. That's the reason there are so many Indian engineers.

Q: Why did this grow out of American culture?

A: Historically, America is a place for men of action, for men who discover things, make things with their hands, have practical intelligence as opposed to book learning. Book-learning was suspect — the musty old European way, as opposed to practical, snazzy America. I think this tradition has never gone away.

The problem is that now it just doesn't work anymore. You can't do anything unless you pay attention in school. You can't invent things without knowing calculus. If you don't study math, it won't work. Benjamin Franklin was an American genius, a model of the American tinkerer, but the Ben Franklin model is not working anymore.

Q. Wasn't everyone talking about the need for better math and science education back in the days of Sputnik?

A: What's new is the sexualization of it. Kids live in such a sexualized world. ... (If you are called a nerd or a geek, it's) not just creepy or weird, you're labeled as someone who is never going to get laid. There's a lot more at stake because kids are so much more exposed to a culture that's all about being attractive, having sex early.

The nerds and the geek stereotype is that if you're doing well in math and science, you are completely unattractive to the opposite sex.

All the nerd and geek self-tests, what they ask you is: Are you good at science and math? Are you unwashed? Have you never had a date? You don't know anyone's phone number except your mothers?

The idea that you can't invent anything if you don't know calculus is as true at the efficient market fallacy.

The cover states that he's a P.h.D. Shouldn't a book about the need for education use correct abbreviations?

Thats because neither of them did such things. You shouldn't write about things you clearly don't know.