Mama said knock you out

Ultimate fighting has grown from obscurity to unbelievable popularity -- it will soon surpass boxing as the premier combative sport. And, it will soon be widely recognized that the baddest man on the planet is not a boxer, but an ultimate fighter. ESPN now covers the weigh-ins before big fights, and even the Times has a story today describing NFL players as fascinated by and in awe of professional fighters. The sport will have reached transcendence when The New Yorker runs an in-depth article covering it with more than cliches ("human cock-fighing", "blood everywhere").

I started training seriously in judo and brazilian jiujitsu back in the 90's, when no-holds barred fighting was totally unknown in the US, although already popular in Japan and Brazil. I spent a summer in Tokyo training with professional fighters like Enson Inoue, pictured below. (These pictures are hopelessly old school; young fans and fighters will smile at seeing them again, but I've had them on my web page since I was a professor at Yale and faculty advisor to the judo club.) 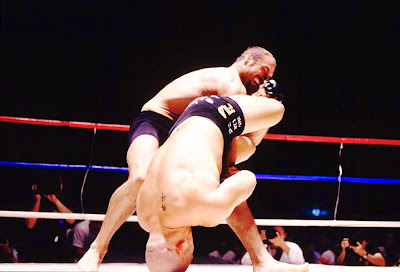 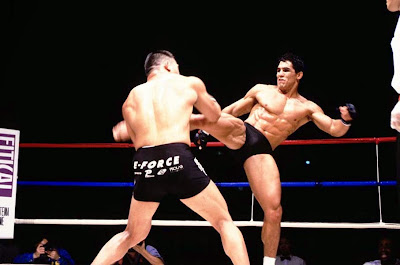 Here's an excerpt from an essay Learning How to Fight I wrote over a decade ago.


Unarmed single combat -- mano a mano, as they say -- has a long history, and is a subject which fascinates most men, both young and old. I can remember serious boyhood discussions with my friends concerning which style was most effective -- karate or kung fu, boxing or wrestling, ... How would Muhammed Ali fare against an Olympic wrestler or judo player? What about Bruce Lee versus a Navy Seal? Of course, these discussions were completely theoretical, akin to asking whether Superman could beat Galactus in arm wrestling. There was scarcely any data available on which to base a conclusion.

However, thanks to the recent proliferation of "No Rules" or "No Holds Barred" (NHB) fighting tournaments, both in the U.S. and abroad, we finally have some interesting answers to this ancient question. As with many things, the truth of the matter was known long ago, and then forgotten and relearned many times. Part of the reason for this is that unarmed combat is a peculiar thing -- it is unlikely to occur in its pure form once weapons such as knives, bottles or guns are available, and when it does occur it is usually under special circumstances involving surprise or intoxication or multiple combatants. The clean schoolyard confrontation between two individuals is something which rarely occurs again in later life. Hence, single combat can only be studied in a controlled way as a form of sport. To my knowledge, the last time this was possible was during ancient times in Greece and more recently in Asia. The ancient Greek sport of Pankration (or "All Powers") was the most popular of all of the original Olympic competitions. It combined boxing and wrestling as well as submission holds such as chokes and arm- and leg-locks. In China and Japan, unarmed fighting was also developed systematically in environments where tests through actual combat were frequent, although the modern descendants of those arts are often far from realistic.

In its modern incarnation, NHB fighting is one of the most exciting new sports to hit the market. It has a small but rapidly growing pool of fans and practicioners, despite its undeserved reputation for being bloody and dangerous. In fact, any student of the history of boxing knows that the introduction of padded gloves, along with rules against grappling, have made that sport much more dangerous than real fighting. Padded gloves protect the hands of a boxer and allow repeated blows to the head of an opponent, increasing the likelihood of brain damage. The prohibition against grappling creates an unrealistic environment, where fighters are forced to stand toe to toe and pummel each other, rather than use more efficient takedown and submission techniques to bring the fight to the ground and end it. That wrestling and submission techniques would often prevail against striking was well known to both the ancient Pankrationists and at least some of the martial artists in Asia. This lesson has been re-learned in the NHB context, as fight after fight ends with a grappler applying a submission hold to his opponent, often with neither suffering more than superficial damage. This is in contrast to the flashy styles of fighting popularized in movies and television, as well as to the expectations of fans of boxing. ...


Teddy Roosevelt on judo and jiujitsu. He lined the white house recreation room with tatami mats and earned a black belt under emissaries from the Kodokan.

Yesterday afternoon we had Professor Yamashita up here to wrestle with Grant. It was very interesting, but of course jiu jitsu and our wrestling are so far apart that it is difficult to make any comparison between them. Wrestling is simply a sport with rules almost as conventional as those of tennis, while jiu jitsu is really meant for practice in killing or disabling our adversary. In consequence, Grant did not know what to do except to put Yamashita on his back, and Yamashita was perfectly content to be on his back. Inside of a minute Yamashita had choked Grant, and inside of two minutes more he got an elbow hold on him that would have enabled him to break his arm; so that there is no question but that he could have put Grant out. So far this made it evident that the jiu jitsu man could handle the ordinary wrestler. But Grant, in the actual wrestling and throwing was about as good as the Japanese, and he was so much stronger that he evidently hurt and wore out the Japanese. With a little practice in the art I am sure that one of our big wrestlers or boxers, simply because of his greatly superior strength, would be able to kill any of those Japanese, who though very good men for their inches and pounds are altogether too small to hold their own against big, powerful, quick men who are well trained.

From "Theodore Roosevelt's Letters to His Children" edited by Joseph Bishop.


From the Times article. NFL players know who is the baddest:

...In Detroit, where Morton spent eight seasons, he was the kind of player who did not get tired even during two-a-days. He can bench press 400 pounds. His body fat is less than 5 percent. But during a sparring session Wednesday, he could not summon the energy to get off his hands and knees. Joker and Gun had to drag him to his feet.

Then he remembered that he was a former professional football player, that his girlfriend was watching, and that Joker and Gun do not believe in peace.

Morton charged at his sparring partner, battering him with a combination of punches and dropping him to the mat with a sweep of his leg. Morton used one hand to grab the man’s neck and the other to pound the side of his face.

If Morton were in the N.F.L., he would have drawn a 15-yard penalty, an automatic ejection, a fine and a possible suspension. But here, he prompted Joker and Gun to do their version of a touchdown dance.

...One of the broadcasters will be Jay Glazer, who has a unique perspective on the bout. Glazer is best known as an N.F.L. analyst, but he also competes in mixed martial arts. When he visits N.F.L. training camps in the summer, players ask him more about fighting than about football.

“Football players are looked at as the biggest and baddest guys on the planet,” Glazer said. “People see them as superheroes. But football players also need someone to look up to. They view mixed martial arts as something even they are unwilling or unable to do. All the guys love Johnnie. But they think he’s nuts.”


Postscript: Johnny Morton, the NFL stud, was viciously knocked out 38 seconds into the first round of his MMA debut. I link to the fight video above, but don't particularly recommend you watch it since Morton is far from a skilled fighter. Mama Said Knock You Out!
Posted by Steve Hsu at 12:31 PM