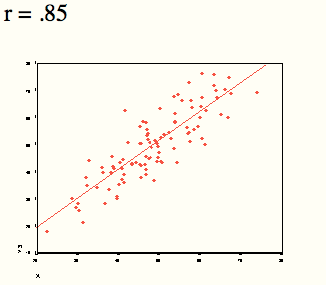 For example, in American football the ability axis might represent the quantities obsessively tracked by NFL scouts: sprinting speed (40 yard dash time), natural strength (bench press), etc., while the vertical axis represents actual output, like passes caught or rushing yards gained. In real life, output is never purely determined by a single, or even several, input ability or abilities. If nothing else, luck ensures that the correlation is imperfect. Sports fans know that the fastest wide receiver isn't necessarily the best, nor the tallest basketball center the most productive, even if being fast or tall confer specific advantages. In the figure, the most able individual is not the most successful. They are seldom the same individual unless the correlation is 100%

In science or academia, we might take the horizontal axis to represent raw intellectual ability. The graph tells us to expect that the smartest person is not necessarily the most successful. It also suggests a population of successful but insecure people (the upper right dots above the fit line -- they are dumber than peers of similar accomplishment) and a population of smart people who are bitter about their unrecognized genius (dots on far right below the fit line -- they are smarter than peers of similar accomplishment).
Posted by Steve Hsu at 11:36 PM

So where exactly are you on the ellipse?

I'll say this: I know less talented entrepreneurs who made a lot more money than I did.

"Better to be lucky than good"

Why should humility be correlated to ability? There could be plenty of successful people with little ability that are not insecure.

CC: you are right. Some people are so over-confident that they might not notice they are on the upper curve.

Apart from a very few professions (pop stars, opera divas) success isn't determined solely by the individual's ability. There is an important element of teamwork. In academia, for example, an individual's success may depend on colleagues' comments, insights, etc. Cooperation is required to succeed. But greater cooperation raises the success of the whole team. In contrast, humans judge success by relative measures. To excel (standout) the individual has to act strategically, feign cooperation, but be prepared to exploit colleagues. Or am I too bitter?

I don't think George Bush and Dick Cheney are on this graph. I think your real graph should look like the light curve of a very irregular elliptical galaxy. The aforementioned are in another universe long, long, above their talent level and not nearly far, far enough away.

How insecure you are is more a function of how you perceive your work environment: in other words, if you believe that success is a function of how well you play politics and you are terrible at politics, then you might feel insecure, even though you are a brilliant physicist with an IQ of 150.

And then again... some people are just naturally insecure

... even if you are judged by how competent you are, if you have the impression that other petty things determine your success/failure, you will probably be insecure.

I myself am both bitter and insecure. More bitter I think, but ah well...

In any discussion of this nature, the Lotka curve should be considered.