The state of Michigan required all public HS seniors to take the SAT last year (~91k out of ~107k total seniors in the state). This generated an unusually representative score sample. Full report.

I'm aware of this stuff because my kids attend a public HS here.

To the uninformed, the results are shocking in a number of ways. Look specifically at the top band with scores in the 1400-1600 range. These are kids who have a chance at elite university admission, based on academic merit. For calibration, the University of Michigan median SAT score is above 1400, and at top Ivies it is around 1500.

1. In the top band there are many more males than females.

2. The Asian kids are hitting the ceiling on this test.

3. There are very few students from under-represented groups who score in the top band.

4. By looking at the math score distribution (see full report) one can estimate how many students in each group are well-prepared enough to complete a rigorous STEM major -- e.g., pass calculus-based physics.

Previously I have estimated that PRC is outproducing the US in top STEM talent by a factor as large as 10x. In a decade or two the size of their highly skilled STEM workforce (e.g., top engineers, AI researchers, biotech scientists, ...) could be 10x as large as that of the US and comparable to the rest of the world, ex-China.

This is easy to understand: their base population is about 4x larger and their K12 performance on international tests like PISA is similar to what is found in the table above for the Asian category. The fraction of PRC kids who perform in the top band is probably at least several times larger than the overall US fraction. (Asian vs White in the table above is about 6x, or 7x on the math portion.) Also, the fraction of college students who major in STEM is much larger in PRC than in the US. 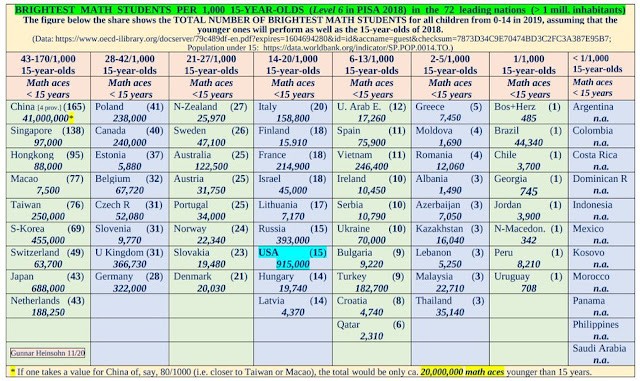 This table was produced by German professor Gunnar Heinsohn, who analyzes geopolitics and human capital.

Note, I will censor racist comments.