I recommend this episode of The Red Line geostrategy podcast: Japan and The Quad.
Serious analysts from the Asia-Pacific region (e.g., Australia, India, Japan, etc.) are often much better than their US counterparts. US analysts tend to misperceive local political and economic realities, and can be captives of Washington DC groupthink (e.g., about weapons systems like aircraft carriers or the F35 or missile defense).
For example, Australian analysts acknowledged the vulnerability of US aircraft carriers to PRC ASBM and cruise missiles well before it became common for US analysts to openly admit the problem. The earliest technical analysis I could find of PRC satellite capability to track US surface ships in the Pacific came from an Indian military think tank (see maps below), at a time when many US "experts" denied that it was possible.
In this podcast Japan's reliance on sea lanes for energy, food, and raw materials is given proper emphasis. Japan imports ~60% of its food calories and essentially all of its oil. The stituation is similar for S. Korea and Taiwan. It is important to note that blocking sea transport to Taiwan and Japan does not require PLAN blue water dominance. ASBM and cruise missiles which threaten aircraft carriers can also hold oil tankers and global shipping at risk from launch sites which are on or near the Asian mainland. Missile + drone + AI/ML technology completely alters the nature of sea blockade, but most strategic planners do not yet realize this. Serious conflict in this region would likely wreak havoc on the economies of Taiwan, S. Korea, and Japan.

Red Line: ... In seeking to counter an ever-expanding China, Tokyo is turning abroad in search of allies. Key to this is the recent revival of "The Quad", a strategic dialogue between the US, Australia, Japan and India. Will it be enough to counter their rising neighbour across the East China Sea? Is this the first step to creating an "Asian NATO", and how will China respond?

Senior Lecturer on Japanese Geopolitics and International Relations for Cambridge University. Senior Research Fellow for Northeast Asia for Chatham House. Author of the book Unequal Allies about the post-war relationship between Japan and the United States.

Part 1: The Return from Armageddon (02:52) Owen Swift overviews Japan's place in East Asia and the fundamental geographic challenges that inform its geopolitics. We tackle Japan's inability to domestically provide the resources and food that its population needs, and how it has historically dealt with this insecurity. The consequences of World War 2 wreaked havoc on Japan's economy, political system and territorial holdings. We analyse the short and long term consequences of this, and seek to understand why it was that Japan took a positive view of the US occupation, comparing it to the option of a possible partial USSR occupation. In the 1980s some thought Japan was on a path to overtake the US economically. While that hasn't come to pass, we look at what it was that made Japan's economic miracle, and the effect that US involvement has today. We look at domestic issues in Japan, including the drastic demographic decline, their ongoing 'defensive only' posture, and the policy options on the table for balancing against the rise of China. Finally we overview Japan's involvement in the Asia-Pacific region as a whole, analysing who it has the best relations with. We look at the extensive investments and infrastructure development Japan is undertaking in ASEAN states, and its cooperation with India and Australia in recent years.

Part 2: The Grand Dilemma (17:56) John Nilsson-Wright helps us understand the fundamental shifts in Japanese politics and foreign policy, including Article 9, the tension between the Yoshida doctrine, public opinion and US pressure within Japan, and the country's re-entry into the sphere of great power competition. We examine the extent of Japan's military presence in the Indo-Pacific; looking at its exercises with other powers and the concerns its neighbours have, some of whom still bear significant scars from World War 2. South Korea's relationship with Japan is one that, on the surface, seems like it should be closer than it is. We analyse why it is that despite their mutual interest in countering North Korea and China, their close geography and both being under the US umbrella, the two states have been unable to overcome enormous domestic resentment and historic scars. Japan's constitution has very tight constraints on what it can do militarily. Nilsson-Wright helps us understand the details of these restrictions and their history over the past few decades. We look at how the legal interpretation of the article has changed as Japan's needs have changed. We also look at Japan's expanding concept of national interest, which began as a purely defensive, geographically limited concept, but that has continued to expand in recent years. We contrast that with the difficulty the government has had with domestic views of Japan's role on the global stage. We tackle territorial issues including the Kuril and Sakhalin Islands, and look at Japan's role in a potential Taiwanese conflict.

Part 3: A United Front? (43:48) John Coyne a takes us through the details of the Quad, and the roles that its constituent members play. We look at Japan's re-examination of their supply chains, their development of strategic depth and the recent news that they are considering abolishing the 1% of GDP cap on military spending. Coyne helps us understand what the Quad actually is - It is not and does not seek to be an Asian NATO - just as ASEAN is not an Asian EU. We look at what the limitations are for each of the states involved, particularly India. We look at the actual relationships and cooperation that has been seen between Quad members. With Japan's newfound willingness to be involved in military operations, we examine how closely they will work with Australia, India and the United States, and the extent to which the Quad is more than just symbolic. We then turn to China's response. Is China likely to seek a grouping like the Quad in opposition to it? Can the Quad actually contain China or its navy in any practical sense? What will China do if cooperation tightens? We look at how China has already sought to hit back, targeting Australia in particular with the "14 Grievances", which were delivered as a consequence of the deterioration of their relationship. Australia's membership and participation in the Quad is a key part of this deterioration. Finally we look at how the Quad members have worked to strategically separate from China, such as Japan's work to defeat China's monopoly on the rare earths industry.

The map below appeared in the 2017 blog post On the military balance of power in the Western Pacific. 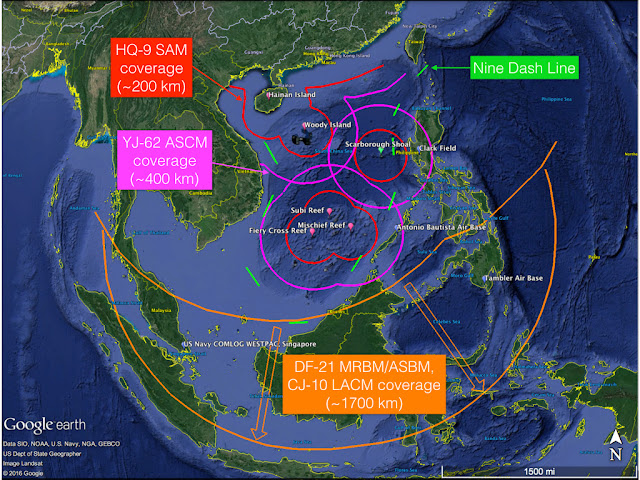 Here is another map: 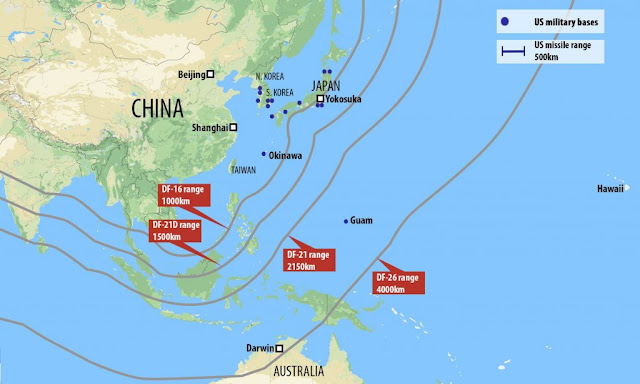 Excerpt below from China’s Constellation of Yaogan Satellites and the Anti-Ship Ballistic Missile – An Update, International Strategic and Security Studies Programme (ISSSP), National Institute of Advanced Studies (NIAS -- India), December 2013. With present technology it is easy to launch LEO (Low Earth Orbit) micro-satellites on short notice to track ships, but PRC has had a much more sophisticated system in place for almost a decade.

We can state with confidence that the Yaogan satellite constellation and its associated ASBM system provide visible proof of Chinese intentions and capabilities to keep ACG strike groups well away from the Chinese mainland.

Though the immediate purpose of the system is to deter the entry of a hostile aircraft carrier fleet into waters that directly threatens its security interests especially during a possible conflict over Taiwan, the same approach can be adopted to deter entry into other areas of strategic interest.

Viewed from this perspective the Chinese do seem to have in place an operational capability for denying or deterring access into areas which it sees as crucial for preserving its sovereignty and security.

Bonus: This political cartoon about the G7 meeting has been widely shared in the sinosphere. Some of the esoteric meaning may be lost on a US audience, but see here for an explanation. Note the device on the table which turns toilet paper into US dollars. The Japanese dog is serving radioactive water to the co-conspirators. Italy, the BRI participant, refuses the drink. France and Germany seem to be thinking about it carefully. Who is the little frog? (Hint: NTD)