Arnold: The Will to Power


I don't know whether Arnold ever read Nietzsche, but he certainly developed the Will to Power early in life. I quite like the video above -- I even made my kids watch it :-)

When I was in high school I came across his book Arnold: The Education of a Bodybuilder, a combination autobiography and training manual published in 1977. I found a copy in the remainder section of the book store and bought it for a few dollars. The most interesting part of the book is the description of his early life in Austria and his introduction to weightlifting and bodybuilding. I highly recommend it to anyone interested in golden age bodybuilding, the early development of physical training, or the psychology of human drive and high achievement. Young Arnold displays a kind of unbridled and un-ironic egoism that can no longer be expressed without shame in today's feminized society.


Chapter 2: Before long, people began looking at me as a special person. Partly this was the result of my own changing attitude about myself. I was growing, getting bigger, gaining confidence. I was given consideration I had never received before; it was as though I were the son of a millionaire. I'd walk into a room at school and my classmates would offer me food or ask if they could help me with my homework. Even my teachers treated me differently. Especially after I started winning trophies in the weight-lifting contests I entered.

This strange new attitude toward me had an incredible effect on my ego. It supplied me with something I had been craving. I'm not sure why I had this need for special attention. Perhaps it was because I had an older brother who'd received more than his share of attention from our father. Whatever the reason, I had a strong desire to be noticed, to be praised. I basked in this new flood of attention. I turned even negative responses to my own satisfaction.

I'm convinced most of the people I knew didn't really understand what I was doing at all. They looked at me as a novelty, a freak. ...

"Why did you have to pick the least-favorite sport in Austria?" they always asked. It was true. We had only twenty or thirty bodybuilders in the entire country. I couldn't come up with an answer. I didn't know. It had been instinctive. I had just fallen in love with it. I loved the feeling of the gym, of working out, of having muscles all over.

Now, looking back, I can analyze it more clearly. My total involvement had a lot to do with the discipline, the individualism, and the utter integrity of bodybuilding. But at the time it was a mystery even to me. Bodybuilding did have its rewards, but they were relatively small. I wasn't competing yet, so my gratification had to come from other areas. In the summer at the lake I could surprise everyone by showing up with a different body. They'd say, "Jesus, Arnold, you grew again. When are you going to stop?"

"Never," I'd tell them. We'd all laugh. They thought it amusing. But I meant it.

The strangest thing was how my new body struck girls. There were a certain number of girls who were knocked out by it and a certain number who found it repulsive. There was absolutely no in-between. It seemed cut and dried. I'd hear their comments in the hallway at lunchtime, on the street, or at the lake. "I don't like it. He's weird—all those muscles give me the creeps." Or, "I love the way Arnold looks—so big and powerful. It's like sculpture. That's how a man should look."

These reactions gave me added motivation to continue building my body. I wanted to get bigger so I could really impress the girls who liked it and upset the others even more. Not that girls were my main reason for training. Far from it. But they added incentive and I figured as long as I was getting this attention from them I might as well use it. I had fun. I could tell if a girl was repelled by my size. And when I'd catch her looking at me in disbelief, I would casually raise my arm, flex my bicep, and watch her cringe. It was always good for a laugh. ... 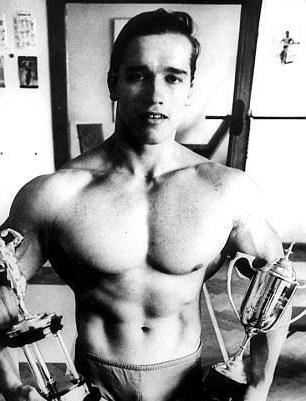