The Face of the Deep State: John Brennan perjury 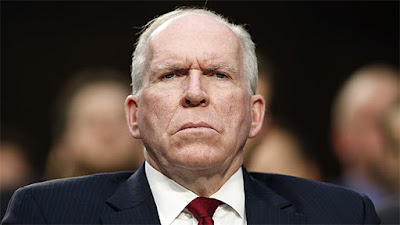 When the full extent of your venality, moral turpitude, and political corruption becomes known, you will take your rightful place as a disgraced demagogue in the dustbin of history. You may scapegoat Andy McCabe, but you will not destroy America...America will triumph over you. https://t.co/uKppoDbduj
— John O. Brennan (@JohnBrennan) March 17, 2018

Here is The Guardian, charging Brennan with lying about CIA spying on the Senate in 2014. What do Democrat Senators Feinstein and Wyden think of Brennan's credibility? No need to guess, just keep reading.


Guardian: CIA director John Brennan lied to you and to the Senate. Fire him. (2014)

As reports emerged Thursday that an internal investigation by the Central Intelligence Agency’s inspector general found that the CIA “improperly” spied on US Senate staffers when researching the CIA’s dark history of torture, it was hard to conclude anything but the obvious: John Brennan blatantly lied to the American public. Again.

“The facts will come out,” Brennan told NBC News in March after Senator Dianne Feinstein issued a blistering condemnation of the CIA on the Senate floor, accusing his agency of hacking into the computers used by her intelligence committee’s staffers. “Let me assure you the CIA was in no way spying on [the committee] or the Senate,” he said.

After the CIA inspector general’s report completely contradicted Brennan’s statements, it now appears Brennan was forced to privately apologize to intelligence committee chairs in a “tense” meeting earlier this week. Other Senators on Thursday pushed for Brennan to publicly apologize and called for an independent investigation. Sen. Ron Wyden said it well:

Here is Brennan, under oath, claiming no knowledge of the origins of the Steele dossier or whether it was used in a FISA application -- May 23, 2017! Credible?

See also How NSA Tracks You (Bill Binney).
Posted by Steve Hsu at 8:29 AM