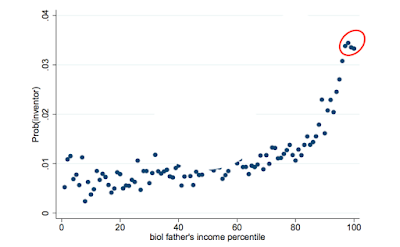 What is the dominant causal mechanism for the results shown above? Is it that better family environments experienced by affluent children make them more likely to invent later in life? Is it that higher income fathers tend to pass on better genes (e.g., for cognitive ability) to their children? Obviously the explanation has important implications for social policy and for models of how the world works.

The authors of the paper below have access to patent, income, education, and military IQ records in Finland. (All males are subject to conscription.) By looking at brothers who are close in age but differ in IQ score, they can estimate the relative importance of common family environment (such as family income level or parental education level, which affect both brothers) versus the IQ difference itself. Their results suggest that cognitive ability has a stronger effect than shared family environment. Again, if one just looks at probability of invention versus family income or SES (see graph), one might mistakenly conclude that family environment is the main cause of increased likelihood of earning a patent later in life. In fact, higher family SES is also correlated to superior genetic endowments which can be passed on to the children.

In this paper we merge three datasets - individual income data, patenting data, and IQ data - to analyze the determinants of an individual's probability of inventing. We find that: (i) parental income matters even after controlling for other background variables and for IQ, yet the estimated impact of parental income is greatly diminished once parental education and the individual's IQ are controlled for; (ii) IQ has both a direct effect on the probability of inventing an indirect impact through education. The effect of IQ is larger for inventors than for medical doctors or lawyers. The impact of IQ is robust to controlling for unobserved family characteristics by focusing on potential inventors with brothers close in age. We also provide evidence on the importance of social family interactions, by looking at biological versus non-biological parents. Finally, we find a positive and significant interaction effect between IQ and father income, which suggests a misallocation of talents to innovation.


... IQ has both a direct effect on the probability of inventing which is almost five times as large as that of having a high-income father, and an indirect effect through education ...

... an R-squared decomposition shows that IQ matters more than all family background variables combined; moreover, IQ has both a direct and an indirect impact through education on the probability of inventing, and finally the impact of IQ is larger and more convex for inventors than for medical doctors or lawyers. Third, to address the potential endogeneity of IQ, we focused on potential inventors with brothers close in age. This allowed us to control for family-specific time-invariant unobservables. We showed that the effect of visuospatial IQ on the probability of inventing is maintained when adding these controls. 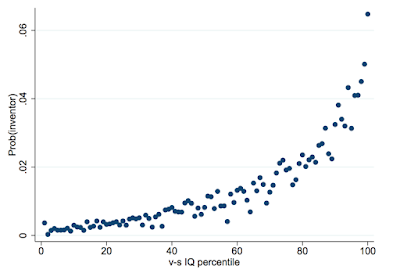 
We look at the effect of an IQ differential between the individual and close brother(s) born at most three years apart.16 This allows us to include family fixed effects and thereby control for family-level time-invariant unobservables, such as genes shared by siblings, parenting style, and fixed family resources. Table 4 shows the results from the regression with family-fixed effects. The first column shows the baseline OLS results using the sample on brothers born at most three years apart. Notice that we include a dummy for the individual being the first born son in the family to account for birth-order effects. The second column shows the results from a regression where we introduce family fixed effects. We lose other parental characteristics than income due to their time-invariant nature.17 The main finding in Table 4 is that the coefficients on "IQ 91-95" and "IQ 96-100" [ these are percentiles, not IQ scores ] in Column 2 (i.e. when we perform the regression with family fixed effects) are the same as in the OLS Column 1. This suggests that these coefficients capture an effect of IQ on the probability of inventing which is largely independent of unobserved family background characteristics, as otherwise the OLS coefficients would be biased and different from the fixed effects estimates.


Note Added: Finland is generally more egalitarian than the US, both in terms of wealth distribution and access to education. But the probability of invention vs family income graph is qualitatively similar in both countries (see Fig 1 in the paper). The figure below is from recent US data; compare to the Finland figure at top. 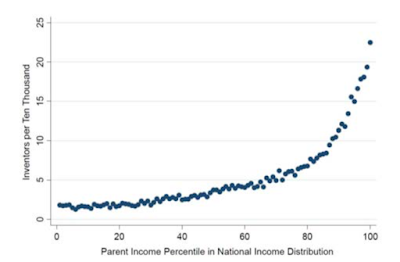 Thanks to some discussion (see comments) I noticed that in the Finnish data the probability of invention seems to saturate at high incomes (see top figure, red circle), whereas it continues to rise strongly at top IQ scores (middle figure above; also perhaps in the US data above?). It would be interesting to explore this in more detail...
Posted by Steve Hsu at 9:41 AM