The nuclear physics of neutron star mergers at MSU's FRIB 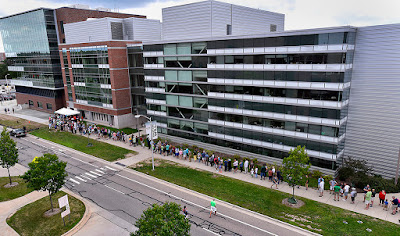 Science reports on MSU's Facility for Rare Isotope Beams, which will probe the properties of nuclear matter.


Science: Last month, astronomers wowed the world when they announced that they had seen two neutron stars merge, apparently creating heavy elements such as gold and platinum and spewing them into space. Nuclear physicists here at Michigan State University (MSU) also cheered the find. They are building an atom smasher, the $730 million Facility for Rare Isotope Beams (FRIB), that could decipher exactly how those elements were forged in the inferno. “We were hoping to see an event like this someday,” says Witold Nazarewicz, an MSU theorist and FRIB's chief scientist.

First proposed in 1999, the project didn't get the greenlight for construction from the Department of Energy (DOE) until 2014. But since then, progress has been rapid. In what was a grassy patch behind MSU's existing nuclear physics laboratory now stands an imposing 200-meter-long building. In its basement, technicians are installing the first section of FRIB's 500-meter-long linear accelerator, which will shoot beams of nuclei ranging from hydrogen to uranium into a graphite target to blast out short-lived new isotopes. In this context, isotope is just another word for nucleus—one that makes for a better acronym.

The accelerator at the Facility for Rare Isotope Beams will create short-lived nuclei thought to be forged in neutron star mergers.

The project is on budget and ahead of schedule, and most of the major technological puzzles have been solved, says Thomas Glasmacher, FRIB's project director. “We don't have anything that we don't know how to do,” he says. Other physicists are impressed with the progress. “The moment they could, they ran with this project,” says Kate Jones, an experimental nuclear physicist at the University of Tennessee in Knoxville. “It's very impressive when you look down in the basement and see all the kit they've got.”

FRIB's nuclei will be key to understanding how neutron-star mergers make heavy elements. Spotted by gravitational-wave detectors in the United States and Italy and telescopes around the world, the violent collision produced an afterglow that over days faded from bright blue to dimmer red (Science, 20 October, p. 282). The light show jibed with astrophysicists' model of a so-called kilonova, in which the disintegrating neutron stars fling neutron-rich matter into space. The model predicts that in the debris, a chain of nuclear interactions known as the rapid neutron process, or r-process, quickly generates most of the elements heavier than iron. (Other elements emerge from supernova explosions and the deaths of smaller stars, from cosmic ray interactions, and also as leftovers lingering from the big bang.)

For astrophysicists, the observation marked a triumph for the kilonova model. For nuclear physicists, it's just the beginning. In the r-process, a nucleus gains weight by gobbling up one neutron after another. At the same time, the nucleus can change its chemical identity through radioactive beta decay, which turns a neutron into a proton and bumps the nucleus up the periodic table of elements. Exactly how the nucleus evolves depends on the speed of the decay and the probability that it will soak up another neutron.

Those parameters are poorly known. “Honestly, the nuclear physics is not in good shape,” says MSU nuclear astrophysicist Hendrik Schatz. “Most of the nuclei involved have not been identified and the theory has not been developed.” FRIB aims to change that by making as many of the neutron-laden nuclei as possible and measuring their masses and lifetimes. That might seem like a hopeless task, as the r-process involves dozens of intermediate nuclei. However, only a few key nuclei—the slowest decayers and absorbers—should act as bottlenecks to control the process and determine which elements are made in greatest abundance, Schatz explains.

Such data would better constrain models of heavy element production in neutron star mergers. The abundances could then be compared with those observed in the universe to determine whether merging neutron stars are the only astrophysical sites of the r-process, Jones says. Many astrophysicists have suggested as much, but that's a leap, she says. “It's very easy to say, ‘Oh, we've found the site for the r-process—Well done!’ In reality this is just opening a door.”

The 1400 physicists who have signed up to use FRIB will perform many other experiments, ranging from trapping and measuring the properties of a single exotic nucleus, to measuring a hail of novel nuclei scattering off a particular target nucleus. Data from the experiments will feed into a more comprehensive theory of the structure of the nucleus, Nazarewicz says. Physicists already have a fundamental theory of the innards of protons and neutrons, particles called quarks and gluons, and how they interact. But using that theory, known as quantum chromodynamics, to predict nuclear structure is effectively impossible: It is so computationally complex that supercomputers are needed just to simulate the proton and neutron.

To model the behavior of nuclei, theorists now rely on various approximate “effective theories” that work for some nuclei but not others. FRIB's grandest goal, Nazarewicz says, is to develop a deeper understanding that will enable theorists to weave these disparate and sometimes discordant theories together into a coherent whole.

First, researchers have to finish the accelerator. In September, they fired a test beam through its first section, made of copper cavities that work at room temperature. They are now installing the main accelerating modules, which are made of superconducting niobium and must be chilled with liquid helium to 2 K. Researchers hope to send beams through the cold accelerator next year. In 2021, they plan to tear down a wall and connect the finished accelerator to the existing lab so that new experiments can begin. ... 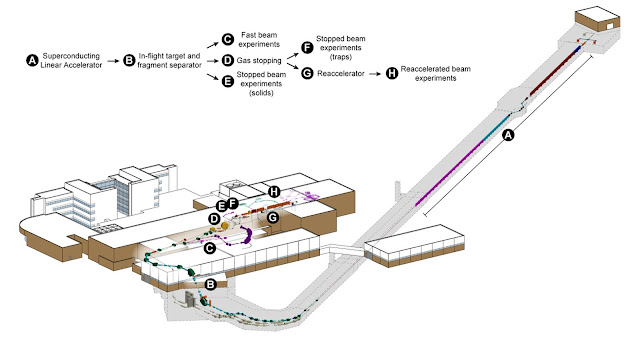