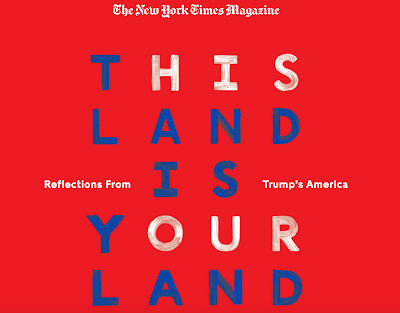 Congratulations, whites now feel they have to vote as a bloc to protect their own interests.

How is this good for America?


Marshalltown, Iowa is about 40 minutes from where I grew up.


NYTimes: ... Gretchen Douglas is a corrections officer from Marshalltown. The 53-year-old had been a Democrat her entire adult life and describes herself as a social liberal and fiscal conservative. She’s a supporter of unions and gay rights and abortion rights and said she doesn’t want to breathe dirty air. She proudly talked of her daughter’s success as a chemist, mentioning that not long ago the only options for women were teaching and nursing. She holds a degree in accounting and can tell you exactly the share of the national debt she and her husband carry.

Even as the recession caused Iowa to shed hundreds of state jobs, Douglas managed to hold onto hers. But in 2012, for the first time in her life, she registered as a Republican, and last week she voted for Trump. Douglas told me she had switched parties because she felt Obama had been irresponsible with spending, causing the national debt to soar. She said Democrats were spending too much on social programs for people who did not need them.

“I don’t want to throw Granny out in the snow, and I think the least of our brothers should be taken care of,” she said. “But I think that those who can work should.” Douglas said there was a time in her life where she was struggling, and so she applied for welfare for herself and her young children but was denied. She didn’t think that was fair, but she worked hard and turned her life around. But these days, she said, “I kind of think for some social programs there is no stigma.”

Douglas never mentioned race, but polls including a recent one of Trump supporters have shown that white Americans’ support for entitlement programs declines if they think black people are benefiting. And the longer Douglas talked, the more she revealed other reasons she had voted for Trump.

When Obama was elected, she hoped he would “bridge race relations, to help people in the middle of Iowa” see that black people “are decent hardworking people who want the same things that we want.” She said people in rural Iowa often don’t know many black people and unfairly stereotype them. But Obama really turned her off when after a vigilante killed a black teenager named Trayvon Martin, he said the boy could have been his son. She felt as if Obama was choosing a side in the racial divide, stirring up tensions. And then came the death of Michael Brown, shot by a policeman in Ferguson, Mo.

“I’m not saying that the struggles of black Americans aren’t real,” Douglas told me, “but I feel like the Michael Brown incident was violence against the police officer.”

The Black Lives Matter movement bothered her. Even as an Ivy League-educated, glamorous black couple lived in the White House, masses of black people were blocking highways and staging die-ins in malls, claiming that black people had it so hard. When she voiced her discomfort with that movement, she said, or pointed out that she disagreed with Obama’s policies, some of her more liberal friends on Facebook would call her racist. So, she shut her mouth — and simmered.

The End Of America’s Racial Détente?


The Federalist: ... The clearest example is the Judge Gonzalo Curiel drama. By the rules of the détente, saying a judge cannot fulfill his duties because of his race or nationality counted as a firing offense. Indeed leaders on both the Left and Right assumed Trump could not overcome it.

But not only did many white voters break the rule of disqualifying a person based on a racist statement, they broke the second rule too. They began to ask why Trump couldn’t say a Mexican judge might be unfair, when we hear all the time about the danger of all white juries and white police officers. The white acceptance of legitimate racial double standards had dissipated, and without it the détente could not stand.

I went to see Bruce at the LA Coliseum in 1985 (Born in the USA Tour) with a bunch of guys from Page House (Caltech). He performed this beautiful version of Woody Guthrie's This Land is Your Land. If it doesn't give you goosebumps, you're wired up differently than me.