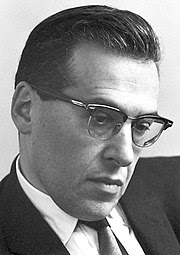 Seventeen year old Julian Schwinger meets Columbia professor I. I. Rabi (Nobel Prize 1944) and explains the EPR paper to him.


Climbing the Mountain: The Scientific Biography of Julian Schwinger [p.22-23] ... Rabi appeared; he invited Motz into his office to discuss 'a certain paper by Einstein in the Physical Review! Motz introduced Julian and asked if he could bring his young friend along; Rabi did not object, and so it began.

The Einstein article turned out to be the famous paper of Einstein, Podolsky, and Rosen, with which young Julian was already familiar. He had studied quantum mechanics with Professor Wills at the City College, and discussed with him the problem of the reduction of a wave packet after additional information about a quantum system is gained from a measurement. 'Then they [Rabi and Motz] began talking and I sat down in the corner. They talked about the details of Einstein's paper, and somehow the conversation hinged on some mathematical point which had to do with whether something was bigger or smaller, and they couldn't make any progress. Then I spoke up and said, "Oh, but that is easy. All you have to do is to use the completeness theorem." Rabi turned and stared at me. Then it followed from there. Motz had to explain that I knew these things. I recall only Rabi's mouth gaping, and he said, "Oh, I see. Well, come over and tell us about it." I told them about how the completeness theorem would settle the matter. From that moment I became Rabi's protege. He asked, "Where are you studying?" "Oh, at City College." "Do you like it there?" I said, "No, I'm very bored."''

Watching young Julian demonstrate such 'deep understanding of things that were at the time at the frontier and not clearly understood,' Rabi decided on the spot to talk to George Pegram, then chairman of the physics department and dean of the graduate faculty, to arrange Julian's immediate transfer to Columbia. He and Motz left Julian waiting and went to see Pegram ...

Thank you very much for giving me the opportunity to talk to Mr. Schwinger. When discussing his problem with him, I entirely forgot that he was a sophomore 17 years of age. I spoke to him just as to any of the leading theoretical physicists. His knowledge of quantum electrodynamics is certainly equal to my own, and I can hardly understand how he could acquire that knowledge in less than two years and almost all by himself.

He is not the frequent type of man who just "knows" without being able to make his knowledge useful. On the contrary, his main interest consists in doing research, and in doing it exactly at the point where it is most needed at present. That is shown by his choice of his problem: When studying quantum electrodynamics, he found that an important point had been left out in a paper of mine concerning the radiation emitted by fast electrons. That radiation is at present one of the most crucial points of quantum theory. ...

Climbing the Mountain is one of the best scientific biographies I have read, on par with books by Pais on Einstein and Oppenheimer, and by Schweber on QED. The account of the early communication between Schwinger and Feynman about their very different formulations of QED is interesting. See also Feynman's cognitive style and Feynman and the secret of magic.

Schwinger was one of the 64 mid-career scientists studied by Harvard psychologist Anne Roe.

Schwinger, of course, did not believe in wavefunction collapse or other Copenhagen mysticism: see Schwinger on Quantum Foundations.
Posted by Steve Hsu at 9:48 AM

Dr. Hsu, has there been much written about Tomonaga? The papers he wrote which earned him the 1965 Nobel (which he shared with Schwinger, and of course Feynman) were written in near isolation in wartime Tokyo, which was heavily bombed. How on earth did he concentrate on his physics? Did he actually welcome his academic work, as a kind of reprieve during those terrible years?

Schwinger, of course, did not believe in wavefunction collapse or other Copenhagen mysticism: see Schwinger on quantum foundations

Not that I really understand such things but isn't "many worlds" in reality "infinite number of worlds"? And if so, do physicists generally believe that something *real* can be infinite? Sounds to me like believing in infinite worlds is no less weird than believing in wavefunction collapse. (Please no irrational numbers example; numbers are not real). Thanks!

stevelovesjewishcock said...
This comment has been removed by a blog administrator.
4:36 AM

stevelovesjewishcock said...
This comment has been removed by a blog administrator.
4:38 AM

stevelovesjewishcock said...
This comment has been removed by a blog administrator.
4:47 AM