Dept. of Physicists Can Do Stuff: Harold Brown 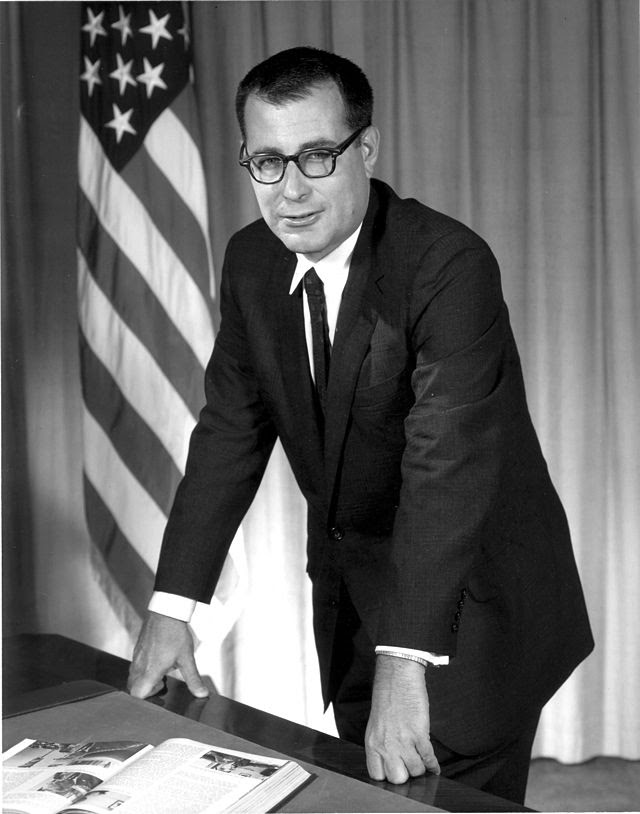 Ashton Carter won't be the first physicist to lead the Department of Defense. Harold Brown was President of Caltech and Secretary of Defense under Carter.


BROWN: You asked me first for a brief review of my career before coming to Caltech. I grew up in New York [City] and went to Columbia University for my undergraduate and graduate degrees, all of them in physics. As a result of acceleration during the war years, I was not quite eighteen when I got my bachelor’s degree in 1945. But then I was somewhat tardy in getting graduate degrees. It took me about four years more to get my PhD. That was in nuclear physics. The area I actually worked on was beta-ray spectroscopy.

... Early in my graduate career, I saw that some of the other graduate students were going to do better in pure science than I, maybe because they were smarter or better researchers, but at least as much, it seemed to me, because they were able to focus very, very strongly on a narrow piece of research that they were doing. And it’s often been said that Nobel Prizes are won by people partly through brilliance but largely through a combination of an ability to focus very narrowly and to have an unhappy family life. [Laughter] Those things may go together to produce the intensity that, in addition to brilliance, creates Nobel Prize winners. I concluded that I was not going to be able to focus that strongly because I had too many other interests. That drew me away from theoretical and toward experimental physics first, and then toward applied science, and then toward managing. So I think it may have been a combination of that sort.

... I found Christy’s attitude very interesting. Christy, of course, is a theoretical physicist. [See The Christy Gadget.] But when I asked him ... he said that he had always found that there were applied problems that had as much inherent intellectual interest [as those relating more to “pure” science]. And if they met that criterion, he was perfectly willing, and felt others should be willing, to look to such applied problems where they had important impacts, economically, environmentally, or whatever. There were enough other faculty people who felt the same way, so we were able to do some of these things.

... There was, I think, a severe split among the faculty on this matter. ... A good many of the science and engineering faculty regard social scientists with much more hostility than they regard humanists—partly because they feel that the word “science” in social science is a lie and see it as an attempt to appropriate some of the prestige that correctly applies to the physical, biological, and mathematical sciences and even to technology and engineering. A good many of the science faculty say that whereas the humanities have a distinct different dimension to bring to bear, social science is pseudoscience and that any relationship to “science” is nonsense. That attitude created some interesting faculty meetings. But in retrospect, I can’t say that that prevented the institute from going ahead and making social-science appointments, or that the social scientists were driven away by this attitude. The best and most prominent of them have quite as much self-esteem as many scientists and engineers, although not as much as some of Caltech’s scientists.

... The economists, in particular, were perhaps at the cutting edge of this dispute. In many ways, they are the most prestigious of social scientists, because they purport to be able to predict or influence the real world more nearly the way scientists and engineers do, than can the sociologists or the anthropologists. At Caltech, many of those who were skeptical about them — and in this I tended to share their skepticism to some degree — said, “The economists who have the most academic prestige and win Nobel Prizes are the ones who are most analytical and pretend to be most like the scientists.” In fact, of course, in order to be analytical, they have to assume away most of the driving forces in real economic behavior. By creating the ideal economic man, they eliminate all the real psychology, and that’s what determines economic behavior.

... One thing I learned from Caltech—it wasn’t the first time I learned it, but I learned it perhaps in intensified form—is that an institution depends on a number of very high-quality people. That number can be small or large. I don’t think I had been at a place before that had quite such a concentration of intellectual power in a not-so-narrow—but not universal, either— area of human ability. It reinforced in me the belief that people who are very good at what they do are likely to be more understanding of other people’s talents than people who aren’t very good at what they do and who therefore try to do other things that they’re not very good at either.

Another interview from the archives:

BROWN: I had been told about Caltech students' practical jokes, and I have seen some of those come off pretty well. I had been told that quite aside from their academic proficiency, they were also very, very intelligent - which is not the same thing. They are very good at spotting flaws in arguments, any arguments, and they are not easily put off by authoritative but incorrect statements. And I have been quite satisfied, pleased, and impressed with what I have seen. I would add that Caltech undergraduates have turned out to be somewhat less self-assured and socially at ease than I had expected. But that has a certain charm; it's not a total loss.

There are many examples of stupid physicists in power, Chu especially coming to mind.

"There are many examples of stupid physicists in power" -- I think that there are about zero examples of stupid physicists, either in power or not in power. Stupid people do not become physicists; they cannot.
"Chu especially coming to mind."
Steven Chu has a PhD in physics from UC Berkeley. Oh, and a Nobel Prize in physics, he has one of those too. Does BobSykes have either of those things? I do not think that he does. I think that BobSykes might in fact be rather stupid.

Some of these guys here might qualify as stupid physicists
http://www.cs.princeton.edu/~ken/Langmuir/langmuir.htm

I do not think that it is fair to call social science "pseudoscience". It's much lower down than that.

I would suggest that there are a lot of models of intelligence. Here’s a very simplistic one I’ll throw out there:

Consider two cars, one has max hp of 500 and the other has max hp of 300. Over the years the first one has been damaged a lot and now no matter what, the most you can get out of it is 100 hp. The second one has deteriorated only a bit and can now get a max of 250 hp. Which car is considered more powerful / smarter? You can argue it either way, though for practical purposes over time the first car has become the functionally weak / dumb one.

I would suggest that there are a lot of people out there that resemble the first car, and some of them are even physicists. Aside from old age (and dementia), the most common malady that I’ve observed is extreme ideology creeping into such a person’s mind, and that makes the person functionally stupid.

A bit of speculative food for thought.

(To be crystal clear this post is not about Chu – I don’t know enough about him to be entitled to a view, so I don't have a view on him.)

...in order to be analytical, they have to assume away most of the driving forces in real economic behavior.

Brown has a very poor understanding of academic economics. Economists attempt to assume away all the forces that are negligible within whatever system they are examining. Microeconomists do a very good job at this and often make quite accurate predictions. Macroeconomists still haven't figured it out. Even if they do make decent predictions for some special cases, they haven't quite figured out all the underlying mechanisms so their top-down predictions often fail. i.e. they don't understand the driving forces well.

I'll assume Brown was an exception to this.