Some good old evo psych fun -- guaranteed to annoy certain people :-)  Nevertheless, interesting because it raises the point that measurements of Personality (e.g., Big 5 or other constructs) are complicated by the fact that people can behave differently depending on the target of the behavior.

Plenty of sociopaths in large organizations are pleasant to superiors but unpleasant to those below them in the hierarchy.


Kind toward whom? Mate preferences for personality traits are target specific (Evolution and Human Behavior 31 (2010) 29–38)

Previous mate preference studies indicate that people prefer partners whose personalities are extremely kind and trustworthy, but relatively non-dominant. This conclusion, however, is based on research that leaves unclear whether these traits describe the behavior a partner directs toward oneself, toward other classes of people or both. Because the fitness consequences of partners' behaviors likely differed depending on the classes of individuals toward whom behaviors were directed, we predicted that mate preferences for personality traits would change depending on the specific targets of a partner's behavioral acts. Consistent with this, two experiments demonstrated that people prefer partners who are extremely kind and trustworthy when considering behaviors directed toward themselves or their friends/family, but shift their preferences to much lower levels of these traits when considering behaviors directed toward other classes of individuals. In addition, both sexes preferred partners who direct higher levels of dominance toward members of the partner's own sex than toward any other behavioral target category, with women preferring levels of dominance toward other men as high as — or higher than — levels of kindness and trustworthiness. When asked to rate traits for which the behavioral target was left unspecified, furthermore, preferences were very similar to self-directed preferences, suggesting that previous trait-rating studies have not measured preferences for partners' behaviors directed toward people other than oneself. These findings may provide a basic contribution to the mate preference literature via their demonstration that ideal standards for romantic partners are importantly qualified by the targets of behavioral acts.


In the figure below, women (top graph) seem to prefer a larger self--rival asymmetry in their mates than men do. In other words, women like men who are kind to them but who are socially dominant towards other men. (Proponents of Game would argue that even this reflects a bit of false consciousness -- that women actually prefer men who are socially dominant towards them!) Click for larger version. 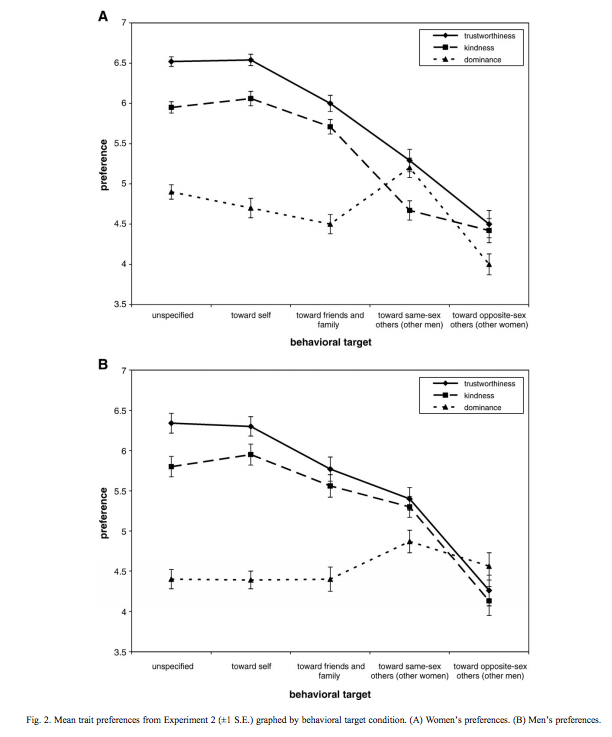 Thanks to a reader for the reference.
Posted by Steve Hsu at 9:03 AM

They seem to think that a correlation of 0.5 means "no better than a coin toss".

"Universities in the United States rely too heavily on the graduate record examinations (GRE) — a standardized test introduced in 1949 that is an admissions requirement for most US graduate schools. This practice is poor at selecting the most capable students and severely restricts the flow of women and minorities into the sciences."

You wouldn't that commented that if they weren't physicists. LOL.
New math?- Florida > physics.

Agreed. A corollary of this is to be careful about confrontations with boys/men with women (e.g.their girlfriend or potential girlfriends) around. The escalation dynamics are different and there is much more concern about face than objective right or wrong.