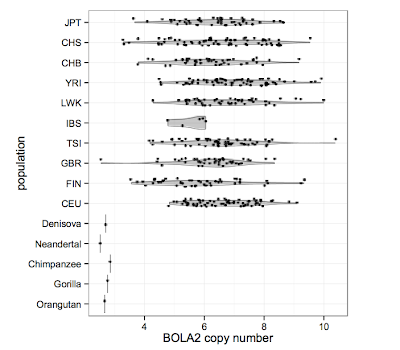 This figure is from the Supplement (p.62) of a recent Nature paper describing a high quality genome sequence obtained from the toe of a female Neanderthal who lived in the Altai mountains in Siberia. Interestingly, copy number variation at 16p11.2 is one of the structural variants identified in a recent deCODE study as related to IQ depression; see earlier post Structural genomic variants (CNVs) affect cognition.


Of particular interest is the modern human-specific duplication on 16p11.2 which encompasses the BOLA2 gene. This locus is the breakpoint of the 16p11.2 micro-deletion, which results in developmental delay, intellectual disability, and autism5,6. We genotyped the BOLA2 gene in 675 diverse human individuals sequenced to low coverage as part of the 1000 Genome Project Phase I7 to assess the population distribution of copy numbers in homo-sapiens (Figure S8.3). While both the Altai Neandertal and Denisova individual exhibit the ancestral diploid copy number as seen in all the non-human great apes, only a single human individual exhibits this diploid copy number state.


My recollection from the earlier (less precise) Neanderthal sequences is that the number of bp differences between them and us is few per thousand. Whereas, for modern humans it's 1 per thousand with an additional +/-15% variation due to ethnicity. So, I think it's fair to say that they are qualitatively much more different from us than we (moderns) are from each other. See also The genetics of humanness.

My colleague James Lee (I note he is too modest to list his Harvard Law degree on his faculty page!) describes the current era in genomics as an "age of wonder" :-)  We can anticipate tremendous discoveries in the next decade.
Posted by Steve Hsu at 9:30 AM

Thanks for the James Lee link. Some really interesting research. I don't know how I missed your 8/3/12 post. BTW, the PDF link there is dead now. Google Scholar had another PDF (19 pages), but I did not see the commentary you mentioned. Would it be possible to give an updated link?

It seems like "Why is it hard to find genes that are associated with social science traits? Theoretical and empirical considerations" would be an interesting topic for discussion. Full text at http://stevenpinker.com/publications/why-it-hard-find-genes-associated-social-science-traits-theoretical-and

Did the paper above have any graphics like figure 2 comparing segmental duplication in Bonobos, Chimps and Humans in
http://www.nature.com/nature/journal/vaop/ncurrent/full/nature11128.html
I did not see any in SI 8, source of the figure above, which seems like the logical place.

Age of wonder indeed. I got sequenced at 23andme, and while height is about 90% genetically determined, something like only 16% of that variance has been linked to genes, and then, 116 genes are involved! Heck, there were several for my eye color, something I thought was simple one allele (remember when you learned about B (brown) and b (blue)?). That means 1) genes interact in very nonlinear ways, like a stock's volatility relative to a portfolio's volatility, and 2) given we have only 25000, it seems many are doing double duty. Good luck with figuring this out.

Well it hints at dumbness, but I guess the problem is we may have established something else, such as dumb Neanderthals get preserved in ice more often.