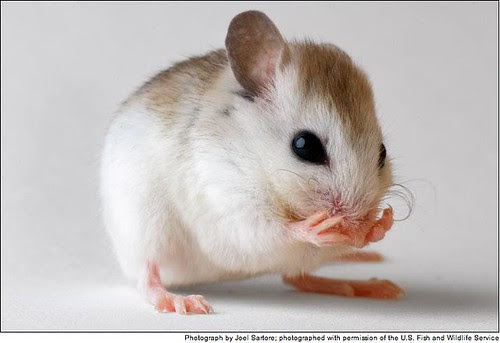 "Horses ain't like people, man, they can't make themselves better than they're born. See, with a horse, it's all in the gene. It's the f#cking gene that does the running. The horse has got absolutely nothing to do with it." --- Paulie (Eric Roberts) in The Pope of Greenwich Village.

NYTimes: ... Dr. Hoekstra started with a species called the oldfield mouse (Peromyscus polionotus), the smallest of the deer mice. For 80 years or more, field scientists have documented its behavior, including excavating characteristically long burrows with an escape tunnel, which the mice will dig even after generations of breeding in cages in a laboratory.

Dr. Hoekstra treated tunnel length and architecture as a physical, measurable trait, much like tail length or weight, by filling burrows with foam that would produce a mold easily measured and catalogued – behavior made solid.

She and her students did this in the field and repeated it in the laboratory by putting the mice in large, sandbox-like enclosures, letting them burrow and then making molds of the burrows. They did the same with another deer mouse species, Peromyscus maniculatus, that digs short burrows without escape tunnels.

The team bred the two species together (they are close enough to interbreed) and measured the burrows of the offspring. Their tunnels showed a blend of parental characteristics, varying in length and with and without escape tunnels. Further breeding crosses between the hybrids and the original short-burrow species were conducted and the tunnels measured again.

Then the scientists matched variations in tunnel architecture to variations in DNA. What they found were three areas of DNA that contributed to determining tunnel length, and one area affecting whether or not the crossbred mice dug an escape tunnel. That was a separate behavior inherited on its own, so that the mice could produce tunnels of any length, with or without escape tunnels.

All complicated behaviors are affected by many things, Dr. Hoekstra said, so these regions of DNA do not determine tunnel architecture and length by themselves. But tunnel length is about 30 percent inherited, she said, and the three locations account for about half of that variation. The rest is determined by many tiny genetic effects. As for the one location that affected whether or not mice dug an escape tunnel, if a short-burrow mouse had the long-burrow DNA region, it was 40 percent more likely to dig a complete escape tunnel.

Both Dr. Anholt and Dr. Bargmann said that for complex behaviors, which can be affected in ways too small to measure by many other genes, the effects of these DNA locations were very significant.


Title and abstract of the Nature article:

Relative to morphological traits, we know little about how genetics influence the evolution of complex behavioural differences in nature1. It is unclear how the environment influences natural variation in heritable behaviour2, and whether complex behavioural differences evolve through few genetic changes, each affecting many aspects of behaviour, or through the accumulation of several genetic changes that, when combined, give rise to behavioural complexity3. Here we show that in nature, oldfield mice (Peromyscus polionotus) build complex burrows with long entrance and escape tunnels, and that burrow length is consistent across populations, although burrow depth varies with soil composition. This burrow architecture is in contrast with the small, simple burrows of its sister species, deer mice (P. maniculatus). When investigated under laboratory conditions, both species recapitulate their natural burrowing behaviour. Genetic crosses between the two species reveal that the derived burrows of oldfield mice are dominant and evolved through the addition of multiple genetic changes. In burrows built by first-generation backcross mice, entrance-tunnel length and the presence of an escape tunnel can be uncoupled, suggesting that these traits are modular. Quantitative trait locus analysis also indicates that tunnel length segregates as a complex trait, affected by at least three independent genetic regions, whereas the presence of an escape tunnel is associated with only a single locus. Together, these results suggest that complex behaviours—in this case, a classic ‘extended phenotype’4—can evolve through multiple genetic changes each affecting distinct behaviour modules.

Note the QTLs for tunnel length interact linearly (additively) -- no sign of epistasis.
Posted by Steve Hsu at 2:30 PM

Interesting, I wonder how much of the Human behavior (within the context of a given culture) is genetically based? At the end, we are all just a bunch of wind up dolls.

Why is this paper in Nature? The findings and conclusions seem to be perfectly trivial. On a related note, it's high time for some entity to sequence a bunch of Belyaev's silver foxes and then carefully compare docile and aggressive varieties. I'd wager that the outcome will be more definitive than anything with high versus normal IQ humans.

Until IQ tests are fitted to the society, tribe, culture, etc. they can't measure tunnel length, so to speak. Natives in the developing world may not tunnel at all and if they do they do so rarely. They may not have much use for tunneling.

"She and her students did this in the field and repeated it in the
laboratory by putting the mice in large, sandbox-like enclosures..."

Was there any change in tunnel arch with this change in environment?

Your take-away is "no sign of epistasis" for QTLs. Isn't epistasis relative? Where does epistasis end and gene expression begin? I think the standard definition of epistasis is based on gene-gene interaction. Whereas a promoter must be non-coding, but it is still independent variant interaction. Ehret et al even found that individual loci can be broken down into multiple SNPs that, considered separately, help explain some missing heritability. Genes can have multiple promoters than can serve as the mechanisms of epistasis, including gene-hormone interactions, with hormones having polygenic influences.


I thought the notion of genetic modules was more challenging to the prevailing wisdom of "complex behavior" genetics. Rather than simply diffuse common variants or rare, genetic-load variants defining behavior, hierarchical networks subject to natural selection determine behavior. The key to understanding those networks is breaking down the behavioral phenotype into modules. For example, general intelligence might consist of short-term memory, verbal IQ, and analytic IQ, which are sufficiently independent that just studying g produces too much noise. After all, you wouldn't do a GWAS of a combined index of arm strength and auditory ability.