A correspondent supplied this interesting data from a 2010 survey of Wharton alumni. As expected, financiers out-earned everyone else, with hedgies at the front of the pack. The average hedgie who graduated in 2000-3 made almost 10x what his counterpart in Consumer Goods or Manufacturing or even Technology and Media made, and about 7x what those in Consulting and Professional Services made. Who are the suckers?

Total compensation seems to peak about 10-20 years after graduation.

There's more data than the two pages below, but they're enough to get the general idea. 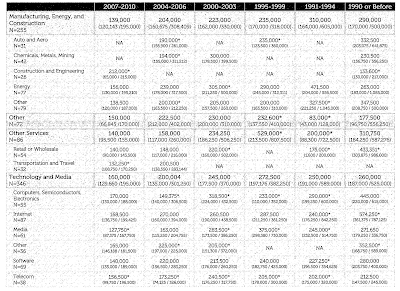 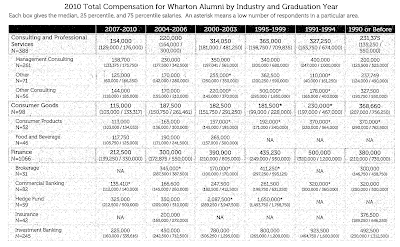 US income inequality caused by financiers and tech entrepreneurs (2006)

The illusion of skill

The Haves against the Have Mores. Pity the poor doctors, lawyers and management consultants. Even the I-bankers, now that hedge fund management has become the ne plus ultra of capitalism. The only guys that the hedgies envy are the super-lucky entrepreneurs who can make their centi-million all in one pop!

As far as doctors and lawyers, I once asked a friend of mine in finance, who lives in a 3000+ sq ft apartment on the upper east side, who else lived in his building. After counting all the money guys, he let slip -- "Oh, I guess there are some doctors and lawyers as well. I don't know how they can afford it." You're so money, and you don't even know it!

For $90k/yr * 2 years, I'm taking my time off and taking my shot.  Buying Wharton is like buying insurance.  I wouldn't call the distribution of outcomes in those groups 'liberating' from the cost of getting their.

And the numbers for hedge funds don't even account for the impact of tax treatment of carried interest on after tax income!

I'm surprised at how low the non-hedge fund earnings are.   I'd feel like a chump if I went to Wharton and was only making $200K ten years later.

Yes, after tax differences are much bigger, although the total compensations of the other groups are like a rounding error for the hedgies ;-)

Who are the suckers? The people who buy hedge fund products, of course. Such as your pension fund managers. It's nice to know where your pension goes. It's even nicer to be self-employed and not feed the parasites.

Agree.  How sustainable is this given the declining returns of hedge funds?  It's hard to charge premium prices for a non-premium product and get away with it over the long term.  I wouldn't be too happy about problems with pension funds.  I wonder what percentage of pensions will end up being taken over by the PBGC (i.e. all taxpayers pay for them) over the next thirty years.

Thinking about this some more, is this actually cause and effect?  Does the tax treatment cause the hedgies to see a greater percentage of total compensation as income where for other groups (subject to ordinary income tax rates) more of their compensation is in perks not subject to income tax?

Hey Steve, just wondering why you're so interested in how much money people make. Do you regret choosing physics over business? Thinking of a career move? Or just angry that these bastards are destroying america one microtransaction at a time?

Just trying to understand what is happening in this once great country of ours...

I also have a specific interest because I almost went into finance on several occasions.

What would you recommend to someone who has a choice between:

(a) Working in a team that does mathematical modeling for a financial services company, while earning a borderline 6-figure income in a city with a low cost of living.

(b) Doing a PhD in a business school ranked between 11-20 in an fairly quantitative non-finance/economics area with an almost certain shot at getting a TT position after graduation.

1. doesn't like stress or the prospect of working very long hours, irrespective of the monetary benefit. Is a slacker, and can at the most study 5-6 hours in a given day, which he/she thinks is more than adequate for a business PhD.

2. is not very passionate about the PhD area (shifting interests), but is more attracted to academic life, while knowing he/she will make more money doing a business PhD than if he/she did a Statistics/Machine Learning PhD (he/she is not capable of doing a decent Math/Physics PhD, though he/she makes the cut for the BGI IQ program based on multiple criteria).

3. will not have the option of starting a PhD a couple of years from now, and doesn't want to have a life-long regret about not doing a PhD.

4. does not think fellow PhD students in business are bright, so probably won't enjoy the company of his peers much, but is not himself/herself any smarter than most of them. found smarter people at the financial services company.

5. is on a student visa, and could get a GC within a year of doing a PhD (which he/she estimates could be done easily within 4 years). Likes America a lot, and would be happy to settle down here.

What framework should I be using to analyze my situation? What additional considerations are there?

If indeed income above (say) $150k per year has limited marginal utility for you, then I would definitely take the academic route. The B-school prof route is cushy, well paid and not that competitive compared to actually working in finance or in a really tough academic field. Actually in some sense it has been a good arb for a while now -- good salary, great quality of life, not too hard, etc.

Point 4 above may cause you some problems, especially further along in your career. Keep in mind that, with the exception of a few specialties, career success even in academia is not primarily determined by brainpower but rather in combination of other things like effort, ability to play politics, make a superficial impression, etc. So being smarter than your competition might not be as much of an advantage as you think. Another way to say this is to note that although 1st rate people hire other 1st rate people, 2nd rate people typically hire 2nd and 3rd rate people.

You seem pretty pragmatic, so you probably won't explode from having to write dumb, obvious papers and spending years getting them refereed and published in "top journals". This is often a problem for really smart people who deviate from the traditional academic specialties where the other people are super smart.

Not sure why you are excluding econ/finance as your PhD area as that might be the best fit.

You can probably pursue your machine learning/stats interest as part of your PhD and later research program. These methods are applicable to almost all fields these days. So I don't think you'll lack interesting things to do.

Actually, the whole hedge-fund compensation model is really stupid.  As I've pointed out on numerous occasions over the years, it seems pretty easy to synthesize an easy business model that completely majorizes it.

Suppose you start a new "hedge fund" using a very simple strategy.  You take the money people give you and stick in a safe one-year account, like a CD or MM or short-term treasuries.  Then, once a year, you take it all down to Las Vegas and bet it on a single spin of the roulette wheel, covering all but two or maybe three of the numbers.  Your annual interest will be 1% or 2% and (assuming you're not highly unlucky) you'll pick up another 6-10% gain from the Red & Black.  So you'll be getting a very good annual return of 8-12% in these difficult times.

Since your returns are very solid and consistent, you can get banks to leverage you up by borrowing huge amounts at maybe 5-6%(?).  Depending on what sort of leverage you can get (and NOTHING like the 30-to-1 leverage which Lehman and all the other I-Banks were using with MBS), you can easily boost your return to 20-50% each and every year, doing much better than nearly all the hedge funds.  If you want to avoid Madoff-suspicion, you can alternate between how many numbers you cover on the roulette wheel so as to make your returns variable.

Since your returns are so enormously good and also so reasonably consistent, you can easily attract endless billions in pension funding, etc.  And each year, you take 2% + 20% (or maybe more) in fees and get to be very, very rich.  Eventually, one of these years, the wrong number comes up on the roulette wheel, all your investor funds are lost, and you say Oops!  But you're still very, very rich, and you've probably anyway done better for your investors than most of the other hedge funds they picked.

Your expenses are really pretty minimal, basically just an annual plane-ticket to Vegas, plus a few million to hire programmers and physics Ph.D.'s to generate all sorts of complex charts and graphs and tables to explain your brilliant "investment model."

Now obviously, gambling on roulette wouldn't really work, since you'd have to tell your investors about it or you'd eventually risk prison.  But while a pure random process wouldn't be suitable, it's easy to think of lots of pseudo-random processes, which act in the same way, but which you can claim you've figured out, like orange-juice futures or the Dow Jones average.  All you really need is to "invest" in a process which provides a high likelihood of good returns and a (relatively) low likelihood of total wipe-out.  And since that's what all the Wall Street people anyway seem to do, you'll have lots of company.

This is also known as the "fake alpha from hidden tail risk" strategy.

Believe me, hedgies have better perks than those other schlubs.

Thank you, Dr. Hsu. I've already decided on not pursuing something that offers no guarantee of either financial success or a stress-free academic life. That rules out the areas that I am passionate about.

>If indeed income above (say) $150k per year has limited marginal utility
for you, then I would definitely take the >academic route.

Right now, a person in the sort of financial services position I might
take up probably works 50% more than a typical b-school faculty member,
and earns probably twice or thrice as much.

For me the calculation boils down to questions like these:

1. can we expect finance services sector:academic salaries to stay at current ratios, increase, or decrease? If there's a chance that it will continue to increase, it might be worth the additional stress.

2. will the amount of cognitive horsepower needed to make an expected annual salary of (say) $ 500K increase significantly with time, making it harder to survive without working extra-hard ? Assuming we're talking about a financial modeling position, can we quantify the IQ distribution within 5 years and 10 years from now ?

I don't have any feel for the answer to question 1. I can see negative trends ahead for finance and for the higher ed bubble (although perhaps not MBA programs). Perhaps other readers will comment.

Re: 2, I don't think it's really a brainpower question. You could get to $500k per year if you work hard and have good interpersonal skills, along with a bit of luck.

++
Here there and everywhere some may ask this- in all of this:
http://www.youtube.com/watch?v=MPr_WQm0-UY

I just can't see the current financial system and its compensation structure lasting much longer.

On the other hand, I remember reading that Michael Lewis published his first "Liars' Poker" book back around 1990 because he wanted to describe the  financial/compensation world he'd been involved in, given that it was obviously just too crazy to survive any longer and people might not believe it had ever existed.

The academic rigors of a top-tier business school. The trouble is that a
ho-hum GPA—meaning anything below a 3.5—will follow them to every
admissions office and is seldom well received.