This recent paper gives a sense of the current state of the art in quantitative genetics. Height is one of the easiest phenotypes to measure, so almost every medical (disease) GWAS provides some additional data -- IIRC, about 200k pheno/geno-type pairs are available for analysis. With a few hundred associated variants detected (depending on how one defines the discovery threshold), one can start to construct predictors like the Weighted Allele Score (WAS) shown below (which is essentially the breeding value from population genetics). See related posts here, here and here.

It is interesting to think about what a similar figure would look like once loci accounting for 50% or 80% of total variance have been identified. (The current value is about 10%.) I would guess this will happen within 5-10 years (approx. 10^7 individuals of known height genotyped). 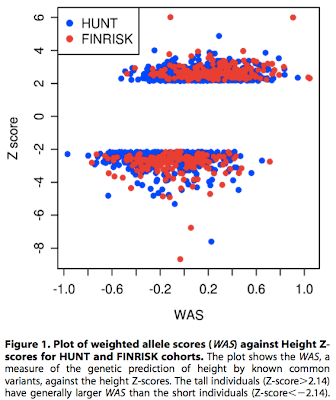 Common Variants Show Predicted Polygenic Effects on Height in the Tails of the Distribution, Except in Extremely Short Individuals

Abstract: Common genetic variants have been shown to explain a fraction of the inherited variation for many common diseases and quantitative traits, including height, a classic polygenic trait. The extent to which common variation determines the phenotype of highly heritable traits such as height is uncertain, as is the extent to which common variation is relevant to individuals with more extreme phenotypes. To address these questions, we studied 1,214 individuals from the top and bottom extremes of the height distribution (tallest and shortest ,1.5%), drawn from ,78,000 individuals from the HUNT and FINRISK cohorts. We found that common variants still influence height at the extremes of the distribution: common variants (49/141) were nominally associated with height in the expected direction more often than is expected by chance (p,5610228), and the odds ratios in the extreme samples were consistent with the effects estimated previously in population-based data. To examine more closely whether the common variants have the expected effects, we calculated a weighted allele score (WAS), which is a weighted prediction of height for each individual based on the previously estimated effect sizes of the common variants in the overall population. The average WAS is consistent with expectation in the tall individuals, but was not as extreme as expected in the shortest individuals (p,0.006), indicating that some of the short stature is explained by factors other than common genetic variation. The discrepancy was more pronounced (p,1026) in the most extreme individuals (height,0.25 percentile). The results at the extreme short tails are consistent with a large number of models incorporating either rare genetic non-additive or rare non-genetic factors that decrease height. We conclude that common genetic variants are associated with height at the extremes as well as across the population, but that additional factors become more prominent at the shorter extreme.

Steve, when do you think parents will be able to genetically engineer their children like in the movie Gattaca? And I am referring to when the technology will be available; I realize that the political climate plays a huge role. I'll go out on a limb here, China will be the first country to come around to accepting it. :-) I am sure though that there will have to be some regulations so as any one population does not share too many of the same genes....

The real issue here isn't sequencing, it is the complexity of the interactions among the various biochemical pathways coded for by our genes. We may have 25,000 genes, but we also have a huge variety of non-coding regulatory mechanisms, such as RNAi, ncRNA, miRNA, etc. I believe this will take a very long time to unravel, perhaps not until 2050. Parents won't make these choices. The state will in my opinion.

For a taste of the long term future, see City and the Stars. http://en.wikipedia.org/wiki/The_City_and_the_Stars

The computational complexity of DNA suggests that genetic choices will be made by computers, not people.

Thanks for offering your opinion. Ethics aside, I will add that I really do not think genetically engineering people is unethical, the question is when not if. There are too many upsides to doing it. Imagine if one country started doing it and managed to wipe out major diseases, extend lifespan, give everyone genius level IQs etc.

The computers will likely be more intelligent, depending on the timeframe and progression of AI. In that sense, scientific progress will be there, not among human beings.

I'm curious why everyone seems to only see upside in genetic engineering of humans (i.e. it will only result in functional improvements, I'm not talking about the social/political/ethical aspects as important as they are).  The human body is an incredibly complex system full of incompletely understood feedback loops.  I think it is fair to say that the body's subsystems are not as cleanly partitioned as commonly believed (I think systems with clean interfaces are more characteristic of human design/thinking than how nature works).  How can we have any confidence that changes we make through genetic engineering will not have massive unintended consequences?

I find it frightening enough that we are gambling with our food supply in this manner.  I would be terrified to participate in first generation genetic engineering of humans.Steve, I'd be really interested in your take on this question.  I appreciate the insights on related topics you have offered in your blog.

You are absolutely correct that there could be complex interactions and unintended consequences. On the other hand there are definitely free lunches (cost free improvements to be had). Certainly some people are *overall* big winners in the genetic lottery (not just in intelligence but in other aspects such as longevity or physical ability). Evolution has only explored a tiny subset of human possibilities.

However, if I were a potential consumer of this kind of technology (e.g., some future company is peddling embryo selection technology as in Gattaca), I'd want to study the science very carefully, just as you would before adopting a particular drug therapy or medical treatment. Ultimately geneticists will only be able to make statistical predictions, so you will be gambling that your intervention actually improves the "fitness" of your offspring.

Thanks for the reply and link.  Can you offer any examples of probable free lunches?  It seems like most changes are tradeoffs (else why would they not be widespread in the gene pool?).  I suspect that some of the "high intelligence genes" involve increased metabolic cost and/or nutrient requirements.  Great if you can meet the criteria, maybe not so great otherwise (I suspect this is a likely explanation for part of the connection between intelligence/creativity and mental illness).  To be clear, I am not disputing that there are likely to be changes with a highly positive cost-benefit tradeoff, just wondering how to identify them reliably.

For whatever it's worth, if I had the ability to genetically engineer my own genome one of the things I would do is restore the enzymatic pathway for my body to produce vitamin C.  This is not a free lunch (there would be a metabolic cost), but seems like a good trade.  Linus Pauling has a discussion about "vitamin C and evolution" in
Vitamin C, the Common Cold and the Flu and speculates that this ability was lost by primates living in the jungle with plenty of dietary vitamin C.  I wonder how fruitful looking back through our evolutionary history for capabilities that were discarded would be?

P.S. Can you give any update on the current status of the BGI study?

Thanks for the link. It answered my question.

One of the big issues, in my opinion, is the libertarian aspect. I think Gattaca-style engineering will inevitably be heavily regulated by the government; it's far too potent to be left to the individual. The regulation will take two forms, I think: first will be the regulation on what specifically is allowed as a criteria for selection. Selection for things like sex, eye color and height probably won't be allowed because they are trivial and not worth the risk. Life span probably will also not be allowed, as it might create a serious demographic crunch. Selection will be allowed for genetic diseases, intelligence and, if its genetic basis can be effectively identified, personality traits that the government deems valuable. The second regulation will be to incentivize engineering to the point where it is effectively the norm, like hospital birthing, or perhaps even mandatory; obviously a mandatory policy would require universal, single-payer healthcare, but it seems like the first world is heading in this direction. As somebody who puts a high emphasis on personal freedom and autonomy, that is one of the aspects of genetic engineering I find most frightening.

Well- you've come to the same conclusion on the likely pioneers in the field as Richard Lynn did in the early 0's, which puts you in pretty good company. Interestingly, the PRC eased back on some of the national requirements for genetic screening around 2002-2003, but I have absolutely no information as to whether this has any effect on policy in the various provinces (which took the lead in developing eugenic policies in the 1980's).

Homozygosity is not neccesarily a bad thing- while I have never heard of any real life measurements of it across the human genome, I would imagine that a good deal of the genes we share with the rest of life on earth are homozygous.

At the risk of appearing snide, we could probably afford to trade the pancreas for a (probably only very slight) increase in brain function. Selection for gametes or embryos with high levels of conscientiousness promoting genes would probably be regarded as an unalloyed good, at least as long as one doesn't anticipate society breaking down; even if you think that we'll all be living in caves and eating MREs come the year 2038, it just sounds nice.

The vitamin C pathway does sound like a thing that would be nice to have, although looking at the Wiki article it seems like a lot of animals that do produce it generate a lot more than they actually need. If we're all eating yeast by then just to have enough food to go round, it might be easier to encourage them to spit out the stuff.

Like you say Seiter, they're all "probable" free lunches. There's no "certain" free lunch, only lunches which we have every reason to believe are free, and are thus worth attempting to purchase (under the risk of incurring an obfuscated price).

You requested an example: neurofibromatosis is a disease causing neural tumors, which don't appear to function in any way. Natural selection cannot completely eliminate the gene that causes this disease because new mutations arise relatively frequently—in perhaps 1 in 4000 gametes. Yet it is fairly unambiguously selected against.

I'd be happy to roll the dice and engineer this gene away, any chance I got...

With a few hundred associated variants detected ... it
is interesting to think about what a similar figure would look like
once loci accounting for 50% or 80% of total variance have been
identified. (The current value is about 10%.)

Do I understand it correctly that you think that the rest of ~70% will be accounted for by ~proportionally more additive loci? This would mean that a comprehensive genetic structure for a relatively simple and very hereditary trait such as height involves ~10% of all human genes. It is probably a safe bet that "intelligence"/g/cognitive potential is significantly more complex. Let's say, 5X. If so, just how useful (or even meaningful) would it be to conclude that intelligence is controlled to a large degree by half of our genes?