What everyday things tell us about the universe

Science writer Marcus Chown's new book is full of marvelous introductions to fundamental physics, motivated through everyday observations. I recommend it to non-scientists and also to scientists looking for new perspectives on physics and how to explain it to ordinary people.

See also this review by Chad Orzel. In the interest of disclosure, I should note that Chown covered some of my research in this New Scientist article, an expanded version of which appears as a chapter in the book. 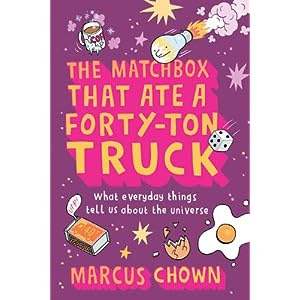 The title is based on a discussion of absorption of light by atoms: how does an atom absorb light with wavelength 500 times larger than the atom itself?

An atom, according to our theory of matter, is a tiny, localised thing like a microscopic billiard ball. Light, on the other hand, is a spread-out thing like a ripple on a pond. Take visible light. A convenient measure of its size is its wavelength - the distance it travels during a complete up-and-down oscillation, or double the separation of successive wave crests. The wavelength of visible light is about 5000 times bigger than atom. Imagine you have a matchbox. You open it and out drives a 40-tonne truck. Or say a 40-tonne truck is driving towards you, you open your matchbox and the truck disappears inside. Ridiculous? But this is precisely the paradox that exists at the interface where light meets matter.

I particularly like Chown's way of introducing quantum randomness by considering photons and a pane of glass:

If light behaves as a stream of particles – and this is the point of this discussion – it has serious implications for understanding why you can see the reflection of your face in a window. Why? Well, what is perfectly straightforward to explain if light is a wave – remember the wave from the speedboat hitting the partially submerged wood and being partially reflected – is fiendishly difficult to explain if light is instead a stream of bullet-like particles. Photons, after all, are identical. However, if they are identical, surely they should be affected identically by a pane of glass? Either they should all be transmitted or they should all be reflected. So how can 95 per cent can go through and 5 per cent bounce back?

This is a classic case of a physical paradox - a situation in which one theory, the particle theory of light, predicts one thing, whereas our common sense experience tells us something contradictory. Our experience is clearly trustworthy - we can indeed see the scene outside a window and simultaneously the faint reflection of our face. Consequently, something must be awry with our idea of photons.

There is only one logical possibility. Each photon must have a 95 per cent chance of being transmitted and a 5 per cent chance of being reflected. It may seem an innocuous fact. However, it is actually a bombshell dropped into the heart of physics. For, if we can know only the chance, or "probability", of a photon going through a window or coming back, then we have tacitly given up all hope of knowing for sure what an individual photon will actually do. As realised by Einstein - ironically, the first person to propose the existence of the photon - this was a catastrophe for physics. It was utterly incompatible with everything that had gone before. Physics was a recipe for predicting the future with total confidence. If, at midnight, the Moon is over here in the sky, using Newton's law of gravity we can predict that at the same time tomorrow night it will be over there - with 100 per cent certainty. But take a photon impinging on a window pane. We can never predict with certainty what it will do. Whether it is transmitted or reflected is totally utterly random, determined solely by the vagaries of chance.

In the day-to-day world every event is triggered by a prior event. A cause always precedes an effect. The dice comes up the number it does because of the effect of all the forces acting on it. You trip and stumble while out walking because a paving stone is loose and catches the heel of your shoe. But what a photon does on encountering a window pane is triggered by no prior event. It is an effect without a cause. Though the probability of a dice coming up “six” can be determined in principle, the probability of a photon going through a window can be determined from no prior event, no hidden machinery whirring beneath the skin of reality. It is nature's bedrock, its bottom line. There is nothing deeper. For some mysterious reason, the Universe is simply constructed this way [4].

The kind of unpredictability that characterises photons at a window pane in fact characterises their behaviour in all conceivable circumstances. And, actually, typical of the behaviour of not just photons but all denizens of the microscopic world of atoms and their constituents - the ultimate building blocks of reality. An atom of radium can disintegrate, or "decay", its central "nucleus", exploding violently like an tiny grenade. But there is no absolutely no possibility of predicting exactly when an individual radium nucleus will self-destruct, only the probability that it will happen within a particular interval of time.

The unpredictability of the microscopic world is not like anything human beings have ever come across before. It is something entirely new under the sun. This is why Einstein got the Nobel Prize for deducing the particle-like nature of light from the photoelectric effect and not for the theory of relativity. He – and the Nobel committee – realised it was a truly revolutionary discovery.

The recognition that the microscopic world is ultimately controlled by irreducible, random chance is probably the single most shocking discovery in the history of science. Ironically, it so appalled Einstein that he famously declared: "God does not play dice with the universe." (The great quantum pioneer Niels Bohr retorted: “Stop telling God what to do with his dice.”). He steadfastly refused to believe that things at a fundamental level in the Universe happened for no reason at all. The bitter irony, not lost on Einstein, was that he was the one who, by postulating the existence of the photon, had inadvertently set loose the genie of randomness in the heart of physics [5].

Chown, whose education in physics led him to graduate school at Caltech, has also written an acclaimed children's book :-)

Why did you decide to write for children after being a successful popular science writer?

MC: When I was at school my favourite subjects were English and Physics. But it was impossible to do both. So I ended up pursuing Physics, ending up at the California Institute of Technology in Pasadena doing radio astronomy. It was there that I thought: “No, this is not for me.” and decided to try and get back into writing. I worked as an editor on “New Scientist”, then left to go freelance when I started writing popular science books. But the books were the route of least daring since they were only a short step from science journalism. But I always wanted to get back to the kind of things I liked at school and write things that were more imaginative and more me. I have many unfinished stories, novel ideas etc. But, for some reason, I thought I would write a children’s story. And that was the thing I pursued through the inevitable rejections by publishers. I actually discovered, when I started, that it was a lot of fun, not the chore that some factual writing can be. Now I want to do more!

Steve: I'd like you to share your thoughts on what time is. I know Einstein described a space-time concept that showed how gravity worked, at least with larger objects. I wonder if, in the world of the very small, time behaves in yet some other fashion. It seems as if we know that certain events will happen but we can't specify a time, t, at which they will occur.

Okay. I just bought it. But how can Reality have Building Blocks?

There is another school of thought—set forth in a recent Physics World article, as I recall—on why the Nobel committee preferred Einstein's theory of the photoelectric effect. It was, on its face, narrowly focused and concerned with a well-established and perplexing experimental result, whereas special and general relativity were explicitly and broadly theoretical, and by the standards of the time struck many as akin to metaphysics. These theories certainly prompted a lot of philosophical reflection, since they contradicted some long-accepted presuppositions, already considered at length by Kant. The broader significance of the photon hypothesis may only have been immediately apparent to the younger and/or most astute of Einstein's contemporaries, and not the Nobel committee.

I don't agree with how Chown explained photon passing through glass. the reflection index could be due to not enough knowledge about the interaction of photons with atoms in glass. glas atoms can block the photon by chance. there's no need to inlcude the wave nature of photons by logic. also, there's no way you should think Einstein didn't get Nobel for relativity because it's regared as less important, no way.