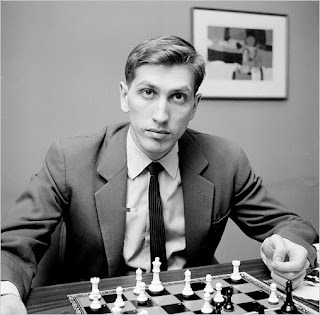 I like to remember how you began, not how you ended...

NYTimes: There may be only three human activities in which miraculous accomplishment is possible before adulthood: mathematics, music and chess. These are abstract, almost invented realms, closed systems bounded by rules of custom or principle. Here, the child learns, is how elements combine and transform; here are the laws that govern their interactions; and here are the possibilities that emerge as you play with signs, symbols, sounds or pieces. Nothing else need be known or understood — at least at first. A child’s gifts in such realms can seem otherworldly, the achievements effortlessly magical. But as Bobby Fischer’s death on Thursday might remind us, even abstract gifts can exact a terrible price.

In 1956 Mr. Fischer, at 13, displayed powers that were not only prodigious but also uncanny. A game he played against Donald Byrne, one of the top 10 players in the United States, became known as “the Game of the Century,” so packed was it with brilliance and daring (and Mr. Fischer’s sacrifice of a queen). “I just got good,” he explained — as indeed he did, winning 8 of the 10 United States Championship tournaments held after 1958 and then, of course, in 1972, breaking the long hold that Soviet chess had on the international championship.

“All I want to do, ever,” he said, “is play chess.” And many thought him the best player — ever. Garry Kasparov once said that he imagined Mr. Fischer as a kind of centaur, a human player mythologically combined with the very essence of chess itself.

But of course accompanying Mr. Fischer’s triumphs were signs of something else. His aggressive declarations and grandiose pronouncements were once restricted to his chosen playing field. (“Chess is war over the board. The object is to crush the opponent’s mind.”) Eventually, they grew in scope, evolving into ever more sweeping convictions about the wider world.

No one's remarked how he died at 64, not a coincidence I think.

Wow, I hadn't thought about it. But they claim he had a "serious illness" for some time.

I wonder what a cogent Fischer would have said about computers dominating chess. Kasparov's comments after having faced Deep Blue are very interesting.

Also, I find it funny that the position on the board that he's studying appears to be a Winawer French, a variation that he played poorly.