Profiting from the meltdown

For every loser, there has to be a winner :-) What I don't understand is why anyone would be long these indices...

Note the article claims that it's the dumb foreigners -- European and Asian financial institutions -- holding the worst tranches of ABX. Perhaps this has something to do with the ECB injecting more liquidity into the European banking system today than in the wake of 9/11.

I suppose the real winners are people who got inexpensive mortgages, as well as the builders and mortgage brokers who made out during the liquidity-driven housing bubble of the last few years. Nevertheless, you can track the antics of the credit meltdown by following the indices discussed below. 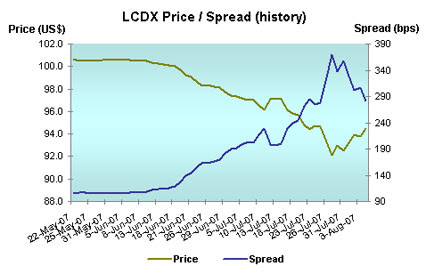 Forbes: A consortium of the nation's leading investment banks have quietly created an index that is not only protecting them against the recent market meltdown but also promising to make them bundles of money in the process.

The index, known as LCDX, was created just weeks before the meltdown began by shrewd financial operatives like JPMorgan Chase (nyse: JPM - news - people ) and Goldman Sachs (nyse: GS - news - people ), which suspected trouble was brewing in the leveraged loan market and needed a way to protect themselves and their hedge fund clients.

This was just-in-time financial engineering. On May 23, LCDX, a credit derivatives contract covering the potential default of 100 large corporate names, made its debut at 100.5. Rising interest rates, widespread fear about the fallout from the subprime mortgage fiasco, and an overhang of $250 billion in private equity loans that had to be refinanced triggered a vicious tumble in the stock market.

By late June, as fears about the extent of the subprime mortgage fiasco spread, the LCDX began to weaken, and those who'd shorted it began making money. Hedge funds loaded to the gills with leveraged buyout loans saw it as a way of hedging their positions, as the cash market in those loans was relatively illiquid.

Goldman Sachs has hedged a large percentage of its $72 billion in obligations, including private equity commitments. Bear Stearns (nyse: BSC - news - people ) reported last Friday it was "making money on hedges related to some large leveraged buyout loans ... or has been selling at lower prices than anticipated."

The leveraged loan market is not the only sector of the fixed-income market where the investment banks shrewdly created an index that would help them hedge against one of their most profitable but risky businesses--the issuance of asset-backed securities like the mortgage bonds used to finance the subprime housing market.

In early 2006 a small number of firms led by Deutsche Bank (nyse: DB - news - people ), Barclays (nyse: BCS - news - people ), Bear Stearns and Goldman Sachs formed the ABX index (a credit default swap of asset-backed mortgages) of 30 most liquid mortgage-backed bonds. The savviest players like Deutsche Bank (which reportedly made $250 million) and several hedge funds on both sides of the Atlantic began shorting that ABX index in early 2006 at par. It now sells at 35, implying that the value of those mortgage-backed bonds and others of their ilk have lost 65% of their value, a potential loss in the tens of billions of dollars. Which means, of course, that smart money's made up to 65% on this one trade.

Indeed, Deutsche Bank derivatives research has been warning clients for months that the leverage in the asset-backed market, especially the collateralized debt obligations set up to hold pools of subprime mortgage-backed securities, had far too much embedded leverage--up to 100 times too much.

...Sunil Hirani, founder of Creditex, says, "If we did not have these credit derivative default indexes--LCDX, CDX, iTraxx Crossover, and others--the credit markets would be functioning with even more volatility, as everyone would be in the dark about pricing and the way to disperse risk." Creditex is a major factor in the credit derivative market.

Of course, it also means there are a lot of folks quietly making a bundle of money while the markets crater. Moreover, no regulatory authority has to approve the creation of these indexes. Nor is there widespread transparency of the trading or price action in these indexes.

Markit, a British company 60% owned by a number of these investment banks, administers the market in credit derivative swaps and posts an average price for each contract at the end of the trading session on Markit.com. A few firms like JPMorgan send their clients daily research updates on the markets and recommend when to buy and when to sell. The Wall Street Journal and the Financial Times have begun to publish a few of the index prices.

There is some concern that the current volatility in the credit markets is due to the lack of liquidity in these indexes. But Markit officials believe about $200 billion of LCDX has traded since May 23. And Hirani says his firm has been doing $20 billion of business in the $100 billion daily volume in the iTraxx Crossover index, which is the index for 100 large European companies.

Still, some of this volume could be hedge funds or investment banks trading in and out of the market to make a few points. LCDX, the credit derivative that is fast becoming the most popular of these, is bound to be volatile, as it includes loans issued by Ford Motor (nyse: F - news - people ) and United Airlines. In September a revised index will include the loans of prospective buyouts like Alcatel, Tribune (nyse: TRB - news - people ) and Chrysler. Since the collateralized loan obligations market is frozen at this time, it means the only way a hedge fund or investment firm with losses in the corporate loan market can protect itself is to go short on these indexes, which is where the big money truly lies.

To be sure, much of this is a zero sum game, which means that for every winner on the short side, there is a loser on the long side. European and Asian financial institutions are believed to have been the unsuspecting buyers of the riskiest tranches of the ABX index, for instance.