I found the videos below on YouTube. I believe they're from a Nova documentary made in the early 80's, which I watched in high school and which had a significant impact on my life. My admiration for Feynman influenced my choice of undergraduate institution (Caltech), profession, even research specialty. One of my colleagues jokingly refers to me as a "Feynman idolator"!

Back in those days, before Surely You're Joking, Mr. Feynman, before the Gleick biography, before the Challenger panel, Feynman was relatively unknown to the general public. My only exposure to him was the documentary and the Feynman Lectures, which I managed to find in a university bookstore.

When I got to Caltech, I was disappointed to find that he was teaching a course called Fundamental Limits to Computation, which seemed weird and peripheral to physics. Little did I know that his work in this area would beget the entire field of quantum computation! Feynman did generously teach a special course called Physics X, which met every Wednesday at 7 pm on the ground floor of Lauritsen. During Physics X, meant mainly for undergraduates, we could ask Feynman any question we liked, and he would happily give us his best answer. I have to admit I didn't make the best use of my time there -- I can't recall having asked any deep or penetrating questions.

The highlight of my Feynman experiences was asking him to give a special talk on the EPR Paradox to the Society of Physics Students in my last year at Caltech. At the time Feynman was thinking about negative probabilities(!) as a way around the weirdness of quantum mechanics. We SPS officers took Feynman out to lunch at a local Thai restaurant to thank him for the seminar. I'm sure it was much more of a thrill for us than for him. He brought along his sketchpad, and told us some stories about learning to draw in stripclubs...

I've heard others say that Feynman had a way of focusing in like a laser on any specialized knowledge he wanted to absorb from someone. In my case, I ran into Feynman one day walking across campus, and after he greeted me with a New York inflected "Hey SHOE!", he proceeded to pick my brain about gyms and healthclubs, a still novel development of the 80's that must have seemed strange to someone born in 1918. "Gee, you're a big guy. Do you ever go to those HEALTH clubs?" he asked. His main interest, it turned out, was whether guys actually exercised there, or just went to meet girls. As if to thank me for my sociological insights, Feynman proceeded to give me some advice on how to pick up girls :-)


The mystery of inertia, as explained by his father. The difference between nomenclature and knowledge.


Analogy between fundamental physics and discovering the rules of chess by observation.

Richard Feynman and the 19 year old me at my Caltech graduation: 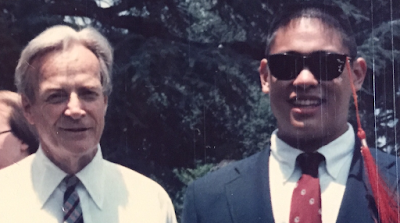 I would love to hear the tips he gave you for picking up girls!

I would like to hear about his comment on NEGATIVE possibility. We all know possibility must be defined between 0 and 1. Any one suggesting a possibility beyong the range of 0 to 1 must be either a complete idiot, or an incredible genius. Of course I am leaning towards the later.

Can negative possibility be verified experimentally?

I watched the film these came from on the BBC in the UK in the 80 - it was from a series called Horizon, and the episode was called "The Pleasure Of Finding Things Out"

I recently bought a used copy of "Quantum Implications : Essays in Honour of David Bohm, by F. David Peat (Editor), Basil Hiley (Editor)" for its essay by Feynman on negative probabilities. I recommend checking it out. It makes perfect sense.

> Can negative possibility be verified experimentally?

He seems warm and engaging- charming in a word- so yes, I too would like to know his tips for picking up girls. That was really interesting, insightful and sophisticated yet kind of beautiful so I bet he can give me some good insights into picking up girls too!