The Times is having a ball with the Spitzer scandal.

Profiles of three high-end (> $1k per hour) prostitutes in NYC. Yes, the internet is the great technology of disintermediation: no pimp or other representation required! How else can a young woman make ends meet in Manhattan?

...These days, men can pore through Web sites filled with client reviews and user ratings for thousands of prostitutes. Searches can be narrowed by hair color, age, body type or behavior — someone offering “GFE,” or girlfriend experience, for example, will act adoringly.

Theirs is a world of mirrors and fantasies, double lives and fake names; the three women told their stories on the condition that they be presented by the names they use in the sex world, but provided their real identities so details could be verified — and they were.

...Ms. O’Donnell, 25, is a Williamsburg hipster with entrancing blue eyes who carries an NPR tote bag and might offer up a few pleasantries on the Whole Foods checkout line before turning back to her Junot Diaz novel.

She came to New York after college to pursue an acting career, and has been working in the sex industry for six years, first as a stripper and lap dancer, lately as a call girl who books her own appointments. She said she relished the time spent with her clients as much as the easy money.

“I’ve traveled to Europe, I’ve met amazing people and I’ve paid off student loans,” said Ms. O’Donnell, a talkative Texan who speaks four languages and is applying to graduate school to study visual arts. “There is no victim here,” she added, “although I can’t claim to speak for every sex worker out there.”

Ms. O’Donnell said she earned about $2,000 a week from a dozen steadies, mostly corporate executives and high-tech geeks who come back two, three or four times a month for the natural breasts, the russett bangs and the coquettish nerdiness she markets online. 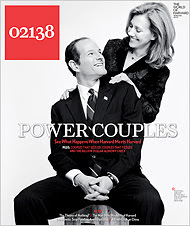 Not my husband (right?) (02138 is the other Harvard magazine; both Spitzer and wife attended Harvard Law).

...That was the refrain: not my husband. Not my husband. Although most women interviewed for this article had a friend or a relative or knew someone who ...

“I’ve heard thousands of stories from women who got blindsided by a version of this,” said Leslie Bennetts, author of “The Feminine Mistake,” an analysis of the roles of working women and mothers. Husbands who were gay, had second families, or patronized prostitutes.

...But even as so many women spoke of the Spitzer debacle as if such things happen only to colonists at the far end of the galaxy, a quieter cohort watched Ms. Wall Spitzer and shuddered in recognition. One such woman, who requested anonymity to protect her children’s identity, had been married for over a decade to a Wall Street executive when she learned he had been using an escort service. She was shattered by the betrayal, by this new stranger.

“To go to an escort service, there is misogyny and a lack of respect for women,” she recounted. “Not to mention the diseases he could have brought home.”

She remained in the marriage for another year by reasoning that at least her husband hadn’t fallen in love with another woman. “I thought, ‘Well, he’s just got issues.’ I was so busy trying to understand him.”

He loved her, he said, and wanted the marriage to work. She hesitated to leave because she did not want to be seen as a home wrecker.

But she came to see in him an angry, toxic arrogance. “He believed he could do whatever he wanted and not get caught,” she said. “Once you feed that dark side, the monster grows. “There was a Madonna-whore thing going on,” she continued. “He had the perfect wife, the perfect children, the perfect job. But there was still self-loathing.”

She ended the marriage decisively some years ago, when her children were very young. They do not know this darker version of why the marriage collapsed.

But this week’s events brought a resurgence of her old pain. She has been weeping a lot for Ms. Wall Spitzer and her daughters, for herself and her children, for what was and what was not.

“My daughter came home from school after the Spitzer story broke,” the woman added, “and she said: ‘Mom, can you believe this? I feel so sorry for his daughters.’ And I’m thinking, ‘You should only know.’ ”